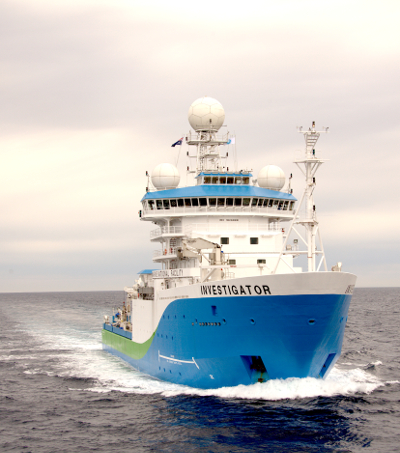 $20 million worth of scientific equipment has docked in Hobart, ushering in a new age of Australian marine science in a stylish coat of blue and green.

CSIRO’s new research vessel Investigator has finally made it to Australian shores, after much delay and anticipation.

The 94-metre scientific behemoth is capable of mapping the sea floor at any depth while collecting weather data 20km into the atmosphere.

It will be used to analyse fish species with sonar and reveal the composition of the sea bed up to 100 metres below the sea floor.

The ship was promised with a $120 million pledge back in 2009, and has finally been delivered as part of the former Labor government’s Super Science Initiative, financed from the Education Investment Fund.

RV Investigator, the Marine National Facility, is owned and operated by CSIRO on behalf of the nation.

There is still work to do before Investigator take shold of Australian marine science; it must pass customs and quarantine checks before entering a 50-day work schedule to fit $6.7 million of scientific gear, including a 1.8-tonne weather radar.

Reflecting the dampening state of Australian Government investment in sicence, job cuts at CSIRO mean the new ship “won't be used to capacity”.

When the CSIRO took official possession of the ship last month, Sam Popovski from the CSIRO's Staff Association said the arrival would be bittersweet.

“We have got another approximately 60 jobs going from the CSIRO in Hobart, so even though CSIRO has committed to using the new vessel, it is not using it to capacity and there is a reduced amount of staff in Hobart that are able to access it to do their research,” he said.

“We've got an exciting new ship with all this capacity yet we've been scrambling to find the funds from government and other sources to actually run it when it gets here.

“I think the disappointment from staff's perspective is the lack of operational funding and the need for stopgap funding to just actually work the ship, and that's been the downside of this whole story.”

The following video details Investigator’s arrival and some of its features.