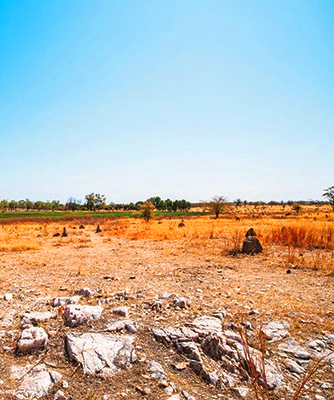 Researchers have discovered rocks in northern Queensland that suggest part of northern Australia was actually part of North America, 1.7 billion years ago.

A new paper by Curtin University researchers concludes that the rocks found in Georgetown, 412 kilometres west of Cairns, have signatures that are unknown in Australia and instead have a surprising resemblance to rocks found in Canada today.

The findings are significant, as they unlock important information about the 1.6 billion year old supercontinent Nuna.

“Our research shows that about 1.7 billion years ago, Georgetown rocks were deposited into a shallow sea when the region was part of North America. Georgetown then broke away from North America and collided with the Mount Isa region of northern Australia around 100 million years later,” says Curtin University PhD student Adam Nordsvan.

“This was a critical part of global continental reorganisation when almost all continents on Earth assembled to form the supercontinent called Nuna.

“The team was able to determine this by using both new sedimentological field data and new and existing geochronological data from both Georgetown and Mount Isa to reveal this unexpected information on the Australia continent.”

Researchers then determined that when the supercontinent Nuna broke apart an estimated 300 million years later, the Georgetown area did not drift away and instead became a new piece of real estate permanently stuck to Australia.

Professor Zheng-Xiang Li, also from Curtin’s School of Earth and Planetary Sciences, said the research also revealed new evidence of mountains being built in both the Georgetown region and Mt Isa when Georgetown collided with the rest of Australia.

“Ongoing research by our team shows that this mountain belt, in contrast to the Himalayas, would not have been very high, suggesting the final continental assembling process that led to the formation of the supercontinent Nuna was not a hard collision like India’s recent collision with Asia,” Professor Li said.

“This new finding is a key step in understanding how Earth’s first supercontinent Nuna may have formed, a subject still being pursued by our multidisciplinary team.”