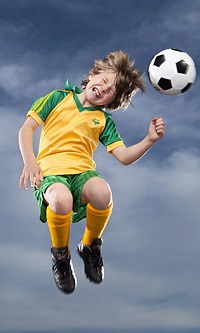 Researchers have investigated the effects of concussion, which can last weeks after a child’s injury.

The study found that the sleep problems, fatigue and attention difficulties that sometimes linger after a concussion could be a sign of reduced brain function and decreased grey matter.

“In the MRI scans of children with persistent concussion symptoms, poor sleep was linked to decreases in brain grey matter and reduced brain function,” according to University of Queensland researcher Dr Kartik Iyer.

“Identifying decreases in brain function can allow us to predict if a child will recover properly.

“This knowledge can help clinicians ensure a child receives targeted rehabilitation such as cognitive behaviour therapy, medication to improve sleep, or safe and new emerging therapies such as non-invasive brain stimulation to potentially reduce symptoms.”

Researchers were able to predict with 86 per cent accuracy how decreases in brain function impacted recovery two months post-concussion.

“Generally, children with persistent concussion symptoms will have alterations to their visual, motor and cognitive brain regions but we don’t have a clear understanding of how this develops and how it relates to future recovery,” Dr Iyer said.

“It can have a serious impact on their return to normal activities, including time away from school, difficulties with memory and attentiveness, disturbances to sleeping habits and changes to mood – all of which affect healthy brain development.”

Most children recover fully after a concussion, but one in 10 has persistent symptoms.

“It is critical that children who receive a head injury see a doctor and get professional medical advice soon after their injury has occurred,” he said.

“While playing sports or riding bicycles or scooters, children should wear proper protective head gear to minimise the impact of a head injury.”

For children with persistent concussion symptoms, a child-friendly non-invasive brain stimulation therapy is being trialled at UQ’s KidStim laboratory.