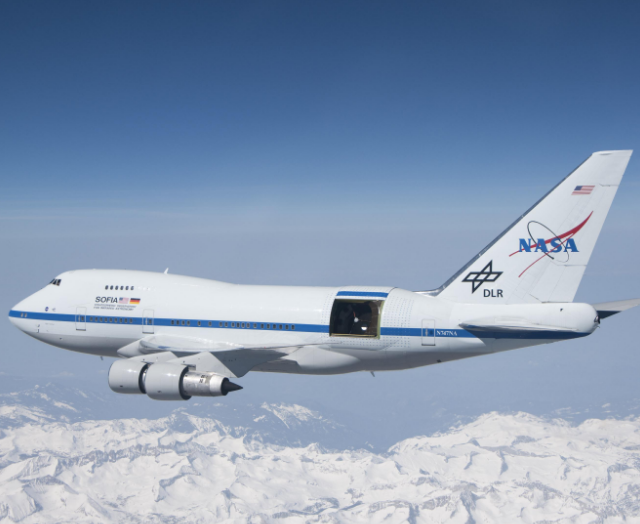 Scientists have found clear evidence for water on the Moon.

There have been signs of water on the Moon before, but previous discoveries could not differentiate between water and other combinations of hydrogen and oxygen.

However, observations through the SOFIA - a telescope in a 747 plane - have allowed scientists to detect the unique signature of H2O at the Moon’s high southern latitudes.

Two new papers report the unambiguous detection of molecular water (H2O) on the Moon, as well as areas on the Moon where water could be trapped stably.

Data from the Stratospheric Observatory for Infrared Astronomy (SOFIA) airborne telescope has shown the spectral signature of H2O, which is not shared with other hydroxyl compounds.

They found that water is present at high southern latitudes in abundances around 100 to 400 parts per million H2O. The authors suggest that the detected water is probably stored in glass or between grains on the lunar surface that protect it from the harsh environment.

In the second study, researchers examined the distribution of permanently shadowed areas — known as cold traps — where water could be captured and remain permanently.

The authors assessed a whole range of possible sizes for cold traps, down to 1 centimetre in diameter. They found that small scale ‘micro’ cold traps are hundreds to thousands of times more numerous than larger cold traps, and they can be found at both poles.

The authors suggest that approximately 40,000 km2 of the lunar surface has the capacity to trap water.

These findings indicate that water is efficiently produced or delivered on the Moon by various processes, and is likely to be stored in the Moon’s cold traps at both polar regions. The presence of water may have implications for future lunar missions targeting and accessing these potential ice reservoirs.

She says it is an exciting find.

“The confirmation that water exists on the moon in larger quantities than previously estimated provides commercial space businesses with the data which will boost private investment,” she said.

“In-situ water is an essential component for generating life resources for life support, fuel production, and in-situ resource utilisation to support an ongoing human presence on the lunar surface.