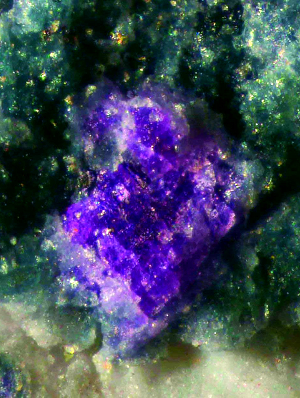 Australian scientists have discovered an entirely new mineral, unique in structure and composition among the world's 4,000 known types.

The discovery was made by mineralogists at University of Adelaide, who say it shows the infinite variability and creativity of natural structures.

The attractive new crystal was first uncovered by a mining company in WA, handed on to CSIRO for initial research, and was given to University of Adelaide researcher Dr Peter Elliott for more detailed analysis.

It has been dubbed ‘Putnisite’, for Australian mineralogists Andrew and Christine Putnis.

Putnisite occurs as tiny crystals, smaller than 0.5 mm in diameter, and is found on volcanic rock.

It appears as dark pink spots on green and white rocks. Under a microscope, putnisite is revealed to form almost perfect cube-shaped crystals.

The mineral combines the elements strontium, calcium, chromium, sulphur, carbon, oxygen and hydrogen - a very unusual combination. It has yet to be determined if the new mineral will have any practical use.

Dr Elliot says it shows there may be no limit to the forms that materials in our universe will take.

“Nature seems to be far cleverer at dreaming up new chemicals than any researcher in a laboratory,” he said.

“Most minerals belong to a family or small group of related minerals, or if they aren't related to other minerals they often are to a synthetic compound - but putnisite is completely unique and unrelated to anything.

“What defines a mineral is its chemistry and crystallography... by x-raying a single crystal of mineral you are able to determine its crystal structure and this, in conjunction with chemical analysis, tells you everything you need to know about the mineral,” he said.

Dr Elliott has researched 12 new Australian minerals in the past seven years, seven of those he found himself.

The first known sample of putnisite was found in a surface outcrop at Lake Cowan, north of Norseman in Western Australia.

Putnisite is described in detail in a report published in Mineralogical Magazine.