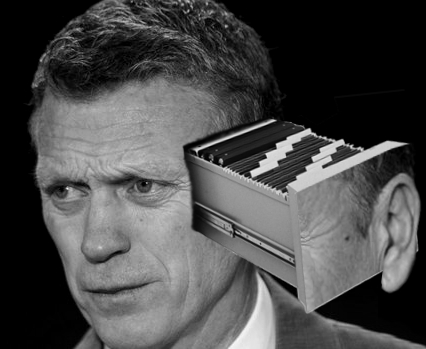 It is annoying when a random piece of information seems to push an important one out of our memory – but researchers say there is so much space that this is almost impossible.

Experts have long wondered if there is an upper limit to our capacity to store memories, and how we manage to remember so many events without mixing up similar memories.

New research has now shed some light on our mental filing cabinet, in a study that tested the ability of rats to remember a number of distinct but similar locations.

Researchers at the Norwegian University of Science and Technology's (NTNU) Kavli Institute for Systems Neuroscience and Centre for Neural Computation say we create separate mental ‘rooms’ for different ideas, to keep everything apart.

The brain creates and stores memories in small networks of brain cells, with the memories of events and places stored in a structure called the hippocampus.

To test the arrangement of memory, researchers let seven laboratory rats run around in 11 distinct yet similar rooms over the course of two days.

The free-running rats wandered around the rooms in pursuit of chocolate crumbs, while researchers recorded brain activity in ‘place’ cells in the hippocampus.

As their name suggests, ‘place’ cells are neurons that fire in a specific place.

The rooms were very alike, but the rats still managed to create a separate, independent memory, or a map for every environment, the researchers found.

The place cells the researchers recorded in the hippocampus continued to form unique representations for each environment.

The researchers also found that these unique representations or firing patterns were stored in the rats' memories.

This meant that when the animal was introduced to one of the rooms a second time, the spatial map from its first exposure to the room was reactivated.

“We investigated whether these memories overlapped across some rooms, but all of the memories were completely independent,” said the paper's first author, Charlotte Alme.

“This indicates that the brain has an enormous capacity for storage. The ability to create a unique memory or map for every locale explains how we manage to distinguish between very similar memories and how the brain prevents us from mixing up events.”

NTNU Professor and 2014 Nobel Laureate May-Britt Moser said that the findings were important for understanding episodic memory, or memories that are formed from autobiographical experiences.

The paper, ‘Place cells in the hippocampus: Eleven maps for eleven rooms’ has been published in the Proceedings of the National Academy of Sciences.