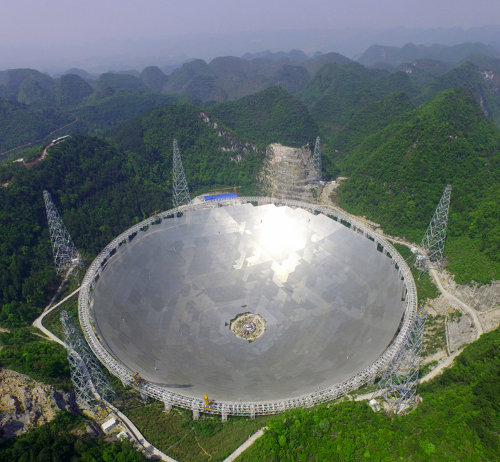 The world’s largest radio telescope has been fired up.

Built at a cost of just $236 million, FAST features twice the sensitivity of the next largest telescope, with a reflector made up of 4,450 panels.

For the Chinese government, its military-run, multi-billion-dollar space program symbolises the country's progress.

China intends to set up a permanent orbiting space station by 2020 and a manned mission to the Moon soon after.

The Government has even given a wildly optimistic reading of the fact is ‘Heavenly Palace’ space station will soon break apart and fall to Earth.

Some Australian engineers will be hoping that at least one part of FAST holds together.

The dish uses a data system developed at the International Centre for Radio Astronomy (ICRAR) in Perth to manage the huge amounts of data it generates.

The software is called the Next Generation Archive System (NGAS), and will help astronomers search for rotating neutron stars and look for signs of extra-terrestrial life.

The system will collect, transport and store about three petabytes of information a year from the telescope.

“Getting that kind of capacity is not too hard anymore but the main challenge is transporting so much data and having the network bandwidth to move it around.”

FAST is an official pathfinder to the multi-billion dollar Square Kilometre Array (SKA) telescope, to be built in Western Australia and South Africa.