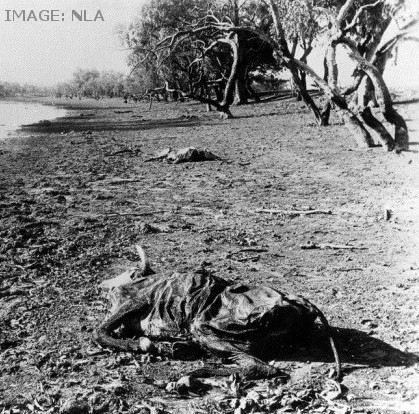 CSIRO has discovered Australia’s ‘once in a century drought’ in the early 1900s caused mass ecosystem collapse.

Researchers the national science agency have painstakingly reconstructed the ‘megadrought’ of the early 1900s, and found that it caused dramatic declines in plant and animal populations across more than a third of the continent.

CSIRO ecologists recreated the Australia’s Federation Drought through historical records, including the study of tens of thousands of newspaper articles, to build a picture of the event’s effects on the nation.

“With many of Australia’s landscapes more fragmented and degraded, and species under pressure from invasive plants and animals, a similar drought today could spell disaster on an even more devastating scale,” researcher Dr Robert Godfree said.

“Wildlife and stock starved or died of thirst. Native birds and mammals died under trees, in creeks, and on the plains. Tens of millions of sheep and cattle were killed, and hundreds of millions of rabbits died of starvation after stripping the landscape of its plant life.”

“The Federation Drought had the biggest documented impact on plants and animals across a continent yet studied,” Dr Godfree said.

“In Australia, more than 60 bird, fish, mammal, reptile, and plant genera were severely affected across 2.8 million km2 or more than a third of Australia.

“Herbivores, grain-eating birds, fish and plants were most vulnerable, while predators who could feed on dead animals and other groups like waterbirds who could travel long distances were less impacted.”

The reconstruction relied on the study of historical newspaper articles over an expanded time period around the drought, sourced from the National Library of Australia.

“Of the 37,000 newspaper articles we read, over 1,500 referred to the drought and more than 400 provided information about local impacts on native and animals or plants,” Dr Godfree said.

“We overlaid this with historical rainfall records and travelled to severely impacted areas, many of which still show effects of the drought to this day.

“We were also able to use resources from CSIRO’s National Research Collections Australia to determine what was impacted and where.”

Dr Godfree said the historic study provides lessons for the possible future impacts of droughts on biodiversity, and shows megadroughts can be potent drivers of rapid, macro-scale ecosystem degradation and collapse.

“In the future, we hope to be able to determine whether a location is at immediate risk of biodiversity loss during extreme drought and take action to prevent it,” he said.

“We’re looking to do this through reviewing recent rainfall data and using this to determine which areas, but also which ecosystems and species are on the brink of decline. These are complex systems these changes can occur suddenly.

“Right now, we need to focus on building resilience to drought by maintaining healthy ecosystems as an insurance against future drought impacts.”