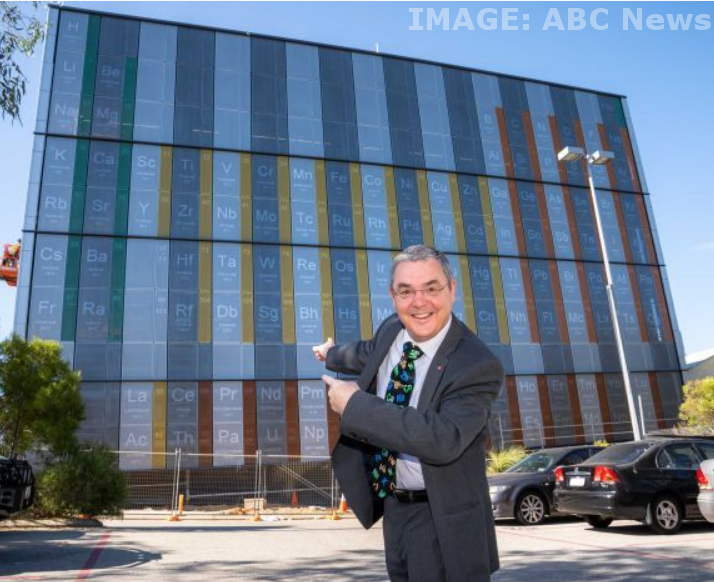 Edith Cowan University (ECU) has constructed what could be the world's largest periodic table.

“As a chemist, I love looking at it, it's a work of art. It's kind of the music of science if you know how to read it. It's fantastic,” Dr Chapman said.

ECU's periodic table is comprised of 360 individual perforated panels, also functioning as a screen that helps with solar heat and glare control.

Dr Chapman said it will act as a teaching tool, and generally remind passers-by of the periodic table’s incredible depth and significance.

“It really does contain the secrets of the universe -- all the elements that make up our natural and built environments and also ourselves as humans,” he said.

The current periodic table of elements was created 150 years ago by Russian chemist, Dmitri Mendeleev.

In 1869, Mendeleev successfully categorised all the known elements based on their atomic weights, and predicted the existence of elements not yet known to man.

“To be able to list everything that exists in the universe, so you understand their properties and all kinds of different things about them in one table -- I think that's way up there as one of the greatest things mankind has ever achieved,” Dr Chapman said.

While there are likely more elements beyond the current 118, they become less stable as they get bigger. The largest only exist for nanoseconds or less, making them near impossible to study.

However, Dr Chapman said that there is enough room on the giant periodic table for future discoveries.

“We've got gaps on our periodic table. So if someone finds another one will stick it up there.”