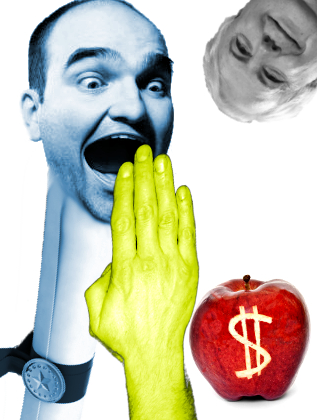 Clive Palmer may be the saviour of disgruntled academics, as a rift between university management and staff comes to light.

Insiders say that while the Vice-Chancellors and other leaders of major universities keenly back the deregulation of fees, staff see the risk in charging more.

Mr Palmer has again played strongly to what he see as the will of the public, telling Triple J’s Hack program that his senators would vote against planned changes.

The reforms being considered include cutting federal funding for courses by 20 per cent and allowing universities to charge their own fees.

“It's bye bye for the education retrospective refit that they’re trying to do,” Palmer said.

The Palmer United Party leader advised students to write to Education Minister Christopher Pyne and “tell him he’s a mongrel”.

Sociologist Dr George Morgan from the University of Western Sydney may back Mr Palmer’s views, but in much more eloquent terms.

Dr Morgan says members of university executive boards back the moves to bring in more money, but those in the trenches seem them mostly as a way to limit access.

“Most university vice-chancellors now support, openly or tacitly, a free market in education, which has allowed Education Minister Christopher Pyne to claim that universities support the government’s higher education package. This is a fallacy,” Dr Morgan wrote in an article for news outlet Crikey.

“Vice-chancellors might represent universities in a formal sense, but they are not representative of the university communities, which by their nature are obstreperous.”

This groundswell of dissent from students and staff has set the scene for the emergence of a new advocacy group; the National Alliance for the Public University (NAPU).

Launched just this week, NAPU says its intention is to bring the public back into the debate on public university.

Education Minister Christpher Pyne was recently quoted as saying: “Each university is responsible for its own governance, but universities should avoid needless controversies that damage their reputation [and] also make Australia look less respectable to our potential international student market.”

For Dr Morgan, the willingness with which university VC’s received this message shows a growing disparity in the tiers of higher education.

“This does not augur well for academic freedom if universities become more dependent on private funding.”

The growing divide is also the subject of a piece by Dr Hannah Forsyth, a lecturer in history at Australian Catholic University.

She argues that: “While public universities are required to protect knowledge, their leaders are charged with a more mundane set of financial obligations. Their separation from their membership has been palpable”.

The uni fee deregulation bill will be debated in the Senate today.