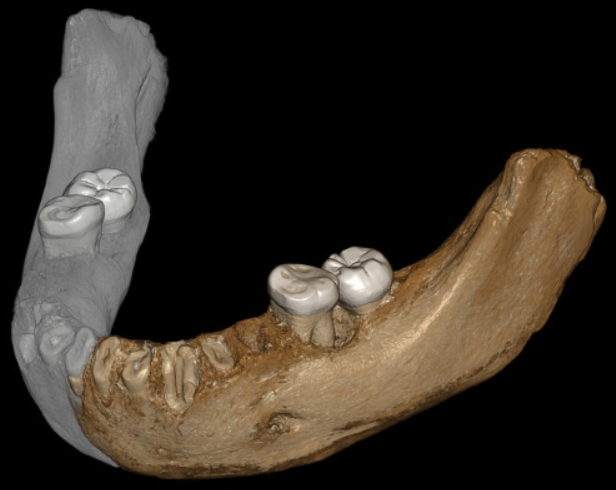 A 160,000-year-old jawbone found in a cave on the Tibetan Plateau shows one of our ancestors travelled much further than we thought.

Denisovans - one of our ancient ancestors – have only been known from a small collection of fossil fragments from Denisova Cave in Siberia.

Now, research from the Max Planck Institute for Evolutionary Anthropology describes a 160,000-year-old hominin mandible from Xiahe in China.

Using ancient protein analysis the researchers found that the mandible’s owner belonged to a population that was closely related to the Denisovans from Siberia.

This population was able to adapt to their low-oxygen environment long before Homo sapiens arrived in the region.

While the researchers could not find any traces of DNA preserved in this fossil, they managed to extract proteins from one of the molars, which they then analysed applying ancient protein analysis.

The researchers found the mandible to be well-preserved. Its robust primitive shape and the very large molars still attached to it suggest that this mandible once belonged to a Middle Pleistocene hominin sharing anatomical features with Neandertals and specimens from the Denisova Cave.

Attached to the mandible was a heavy carbonate crust, and by applying U-series dating to the crust the researchers found that the Xiahe mandible is at least 160,000 years old.

Chuan-Chou Shen from the Department of Geosciences at National Taiwan University, who conducted the dating, says: “This minimum age equals that of the oldest specimens from the Denisova Cave“.

The experts say these people had already adapted to living in this high-altitude low-oxygen environment long before Homo sapiens even arrived in the region.

Previous genetic studies found present-day Himalayan populations to carry the EPAS1 allele in their genome, passed on to them by Denisovans, which helps them to adapt to their specific environment.

The fact that the Tibetan fossil is comparable to similar aged archaic hominid fossils from central east Asia suggests that Denisovans may have been hiding out in the fossil record all this time.

“We now know that Denisovans lived on the Tibetan plateau.  We used to think that only modern humans could do that, and only relatively recently, from around 30 thousand years ago,” said Murray Cox, Associate Professor of Computational Biology at Massey University.

“There’s a strong bias in much of our thinking – we tend to believe that only modern humans are clever enough to go to certain places or live in certain ways. It’s now clear we’ve overestimated our uniqueness.

“Archaic humans like Denisovans were much more resourceful and adaptable that we have given them credit for.”