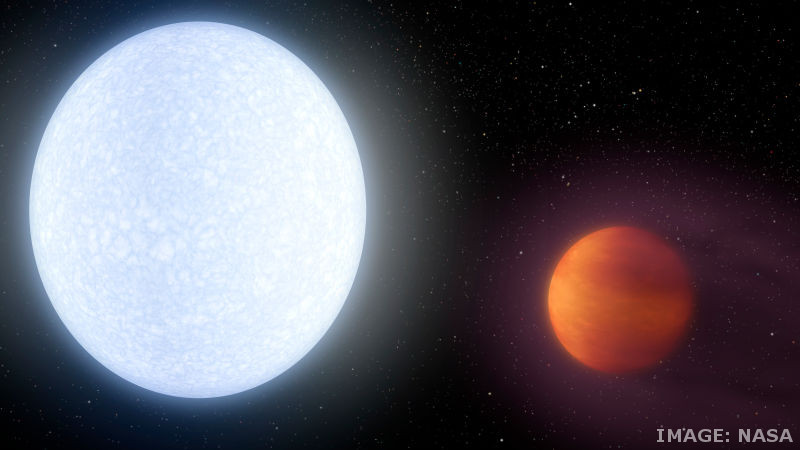 Scientists have reported the discovery of a mind-bendingly hot exoplanet.

The planet’s estimated daytime temperature of about 4,600 kelvin (4,327 degrees Celsius) is so high that it would cause molecules to break apart and its atmosphere to evaporate.

This finding helps to improve the understanding of planets orbiting massive, hot stars, which has been limited so far.

Thousands of exoplanets are known to exist, but only six have been found orbiting hot, A-type stars (which have temperatures of 7,300 to 10,000 kelvin), and none has been found around even hotter B-type stars.

Previously, the hottest known planet (around 3,300 kelvin) was found orbiting a star with a temperature of around 7,430 kelvin.

Researcher Scott Gaudi and colleagues have now discovered a Jupiter-mass gas giant called KELT-9b about 650 light years away, orbiting a massive star called KELT-9 – a star with an estimated temperature of around 10,170 kelvin, placing it at the dividing line between A- and B-type stars.

The Jupiter-like planet is tidally locked, so one of its sides permanently faces its host star (in the same way one side of our Moon always faces Earth).

The authors say the planet’s dayside temperature of around 4,600 kelvin, similar to that of K-type dwarf stars. The level of extreme-ultraviolet stellar radiation that the planet receives is so high that its outer atmosphere is being stripped away.

Atomic metals in the atmosphere were assumed to be the primary absorbers of the radiation.

The extreme ultraviolet radiation bombarding KELT-9b is burning off its atmosphere, probably bestowing it with a glowing gas tail reminiscent of a comet.

“Either the planet’s atmosphere will be completely evaporated by the high-energy stellar radiation that it is being bombarded by, leaving—perhaps—a bare rock core, or (a more likely scenario), the star will run out of hydrogen fuel before the planet is evaporated, and in about 300 million years, the star will swell to the size of the planet’s orbit, swallowing the planet whole,” he told reporters.

“Regardless, the planet is doomed to only live a few hundred million years more.”