A massive effort to move hundreds of patients is complete, marking the official opening of the new Gold Coast University Hospital this week.

The biggest planned patient move in Australian history has been successful, with over 200 people transferred in just two days from the old site.

The newly-finished $1.76 billion hospital in Parkwood has been operating its new research and teaching facility for several months, but now that the patients are all in the GCUH is officially in full swing. 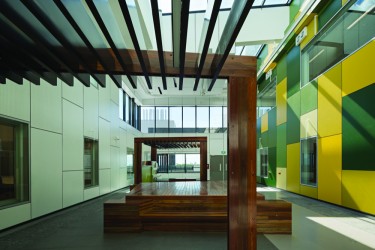 A fleet of taxis ferried the less-seriously ill to their new accommodations.

Gold Coast Health chief executive Ron Calvert says there may have been some small snags along the way, but for the most part he could not be more pleased.

“The move transition has been an overwhelming success,” Calvert said.

“So far it has been completely uneventful, which is exactly what we wanted.”

The improved facility is of course taking new customers – with five people admitted to the new emergency room practically as its doors were opening.

“We've had a steady stream of patients through the new emergency department, and it seems to be business as normal,” Calvert said.

“It's almost an exactly typical day in the emergency department.”

The mood is reportedly “buoyant” among staff, impressed by their new base.

Patient Karl Carey, 79, said his move could not have been easier: “The staff did everything for me, I didn't have to lift a finger,” he said

“The people are the best part of this hospital.”

GCUH has also lined up more than 170 collaborative activities with the nearby Griffith University.