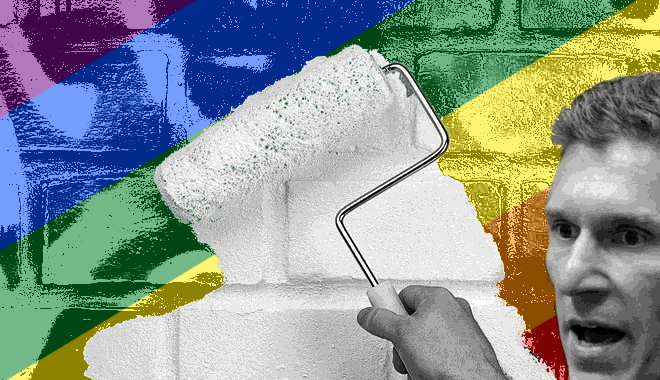 EDITORIAL - This email address is being protected from spambots. You need JavaScript enabled to view it.

The Prime Minister is under more pressure to scrap the ‘Safe Schools Coalition’ program from the Neolithic faction of the LNP.

Some of the most God-fearing, repressive and hateful homophobes in federal politics have got their chastity belts in a bunch over the program, which is designed to change kids’ opinions and treatment of their LGBTIQ classmates.

LNP backbenchers Cory Bernardi and George Christensen have condemned Safe Schools this week. Ironically, they did it with the kind of outdated vitriol that the program is trying to remove from modern discourse.

Prime Minister Malcolm Turnbull has launched a review of the $8 million program, but that is not enough for the most ardently anti-LGBTIQ.

While Safe Schools has been running in classrooms across the country (except in the NT) for two years now, it is only after recent articles in News Corp publications that the LNP’s greatest theocrats have been up in arms.

Cory Bernardi was one of the first to fire off, appearing to argue that not bullying gays was basically communism, or something.

“[Children are] being bullied and intimidated into complying with a radical program,” Senator Bernardi told the ABC this week.

“It makes everyone fall into line with a political agenda.

“Our schools should be places of learning, not indoctrination.”

Later this week, conservative Queensland MP George Christensen joined the brigade, in an apparent attempt to show which LNP member was the loudest relic of a bygone era.

He singled out the website of youth organisation Minus18 for particular criticism, because it has references to chest binding and penis tucking for trans kids, and also mentions sex toys.

The site is just a resource for students to learn about sexuality, themselves and their classmates, which prevents them having to trawl the internet for such advice elsewhere, which is exactly what they would otherwise do.

Mr Christensen appears to be concerned the Safe Schools program teaches kids that they can find anything they want on the internet; something a vast majority of them already know.

“This material is putting children at risk of being sexualised at an early age,” he said.

“If a man exposed a child to these websites, sex clubs, sex shops and online communities on the internet we would call this a paedophile grooming a victim.”

“North Korea gets schoolchildren to tip off teachers and thereby the state that their parents have Bibles in their homes,” he told the Senate.

“Be very wary of those intolerant of different views when they start invading schools.”

One of the most vocal supporters of the program has been Victorian Premier Daniel Andrews, whose home state was the first to roll out Safe Schools back in 2012.

“This particular program is designed to help a particular group of teenagers: those who are attracted to the same-sex,” Mr Andrews said in a Facebook post this week.

“They’re far more likely to get bullied at school – and this program is designed to make them feel safe... [but] now some Liberals have discovered it, and want to see the end of it.

“Teachers have to be given the tools to deal with every situation – no excuses.

“But let’s be honest here: I don’t think these extreme Liberals are actually offended by the structure of the program, or the teachers who lead it.

“I just think they’re offended by the kids who need it.

The independent review announced on Tuesday will advise Education Minister Simon Birmingham on whether the program's material is “age appropriate” by mid-March.