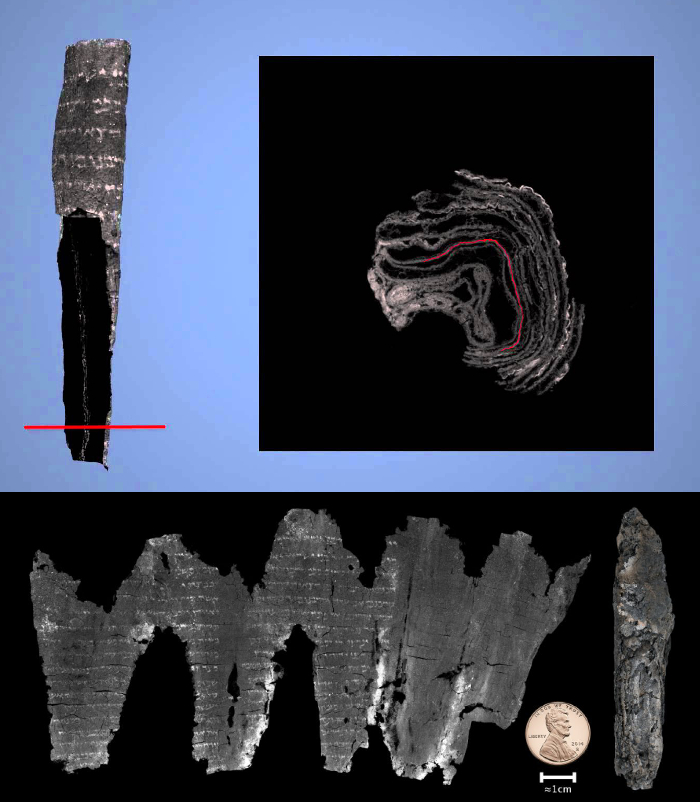 The En-Gedi document is the oldest Pentateuchal scroll from ancient Hebrew history outside of the Dead Sea Scrolls.

The high-tech research revealed the ink-based writing hidden on the scroll’s untouchable, disintegrating sheets, without ever opening it.

Previous studies have successfully identified text within ancient artefacts without physically touching them, but the review of the En-Gedi manuscript took that to a new level.

The study from experts at the University of Kentucky and the University of Jerusalem represents the first severely damaged, animal skin-based scroll to be virtually unrolled and non-invasively read line by line.

The incredible digitisation techniques revealed the ink-based text within the splintering manuscript of the En-Gedi scroll, which could not be unfurled or even touched as it had been burned and crushed into lumps of charcoal.

The team made a volumetric scan of the scroll using X-ray microtomography, followed by segmentation, which creates a virtual ‘page’ containing the writing.

The team was able to piece together over 100 scanned segments of the scroll by hand, before performing further manipulation of the digitized scroll involved using texturing and flattening techniques.

Finally, virtual unwrapping allowed the researchers to unveil the text written on its pages.

The compiled digitised text on the five complete wraps of the En-Gedi scroll is arranged on two distinct columns of Hebrew, featuring legible and countable lines, words, letters, and spacing.

Further analysis revealed the scroll’s writings to be the book of Leviticus, which makes it the earliest copy of a Pentateuchal book ever found in a synagogue’s ‘Holy Ark’.

This virtual unlocking of the En-Gedi scroll paves the way for further scholarly analysis of this and other text buried in delicate, damaged materials.

The research team’s article is accessible here; “From damage to discovery via virtual unwrapping: Reading the scroll from En-Gedi”.