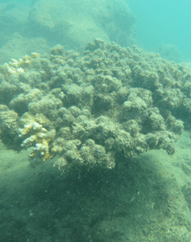 The Australian Academy of Science is “greatly concerned” about the cherrypicking and misrepresentation of scientific evidence.

The academy has made a submission to a Senate inquiry into the reliability of Great Barrier Reef science.

The peak science body’s president, Professor John Shine, wrote that science s being wilfully misused in a “dangerous” way that could lead to “poor outcomes”.

The inquiry was launched at the urging of Nationals and Liberal MPs, and is looking at the evidence linking pollution from farm runoff to degradation of the reef.

Despite the dispute, the Queensland government has passed legislation to limit nutrients, sediments and chemicals running into the reef’s catchments.

“A commonly used tactic in opposing or advocating for policy positions is to ‘cherrypick’ scientific findings rather than consulting and analysing the body of literature systematically.

“Cherrypicking evidence to support a decision or position is dangerous and leads to poor judgment and outcomes.”

The academy has backed the methods and findings of a 2017 Scientific Consensus Statement on the impacts of poor water quality of the reef.

The Australian Environment Foundation (AEF) – a group that also supported Dr Ridd’s tour – wrote to the inquiry to repeat Dr Ridd’s claims that the science linking farm pollution to the reef is “demonstrably wrong or unreliable”.

Dr Jennifer Marohasy, a former director at the AEF who now works at the Institute of Public Affairs, says water quality is actually improving along the reef, and that there is a government conspiracy to “maintain the perception of declining water quality”.

Dr Marohasy has been accused of misrepresenting a reef scientist work in an IPA video.

The Senate inquiry is due to report in October 2020.