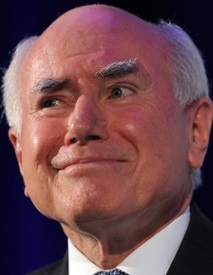 Academics have labelled an honorary doctorate given to former prime minister John Howard as “deeply scandalous and inappropriate”.

The University of Sydney is awarding Mr Howard the doctorate in acknowledgment of his achievements, including “world-leading gun law reform, leadership in East Timor and contribution to Australia’s economic reform”.

It is set to be bestowed at a graduation ceremony today.

But over 100 staff and PhD students have lodged a petition calling for a separate graduation ceremony for students whose ceremony would be “effectively ruined” by having Howard honoured at the same event.

Signatories threatened to boycott the graduation night and protest outside instead.

“To confer a doctorate on him is an insult to Indigenous people, refugees, and anyone committed to multiculturalism, peace and social progress in this country and in the world,” the letter says.

It cites the invasion of Iraq as the main driver of the disgust.

University of Sydney senior lecturer in English and linguistics, Nick Reimer, told reporters that the honorary doctorate “flew in the face” of the university’s values.

“Howard’s period in office exemplified the kind of prejudice and disregard for the social good which entirely goes against the mission of an institution like a university,” he said.

“... The idea that the university would honour him is deeply scandalous and inappropriate.

“It’s true that Howard was elected but part of the role of the university is precisely to constitute a kind of counter power and to call government and politicians to account, and the kind of craven courting of politicians, the opportunistic courting that university senior management regularly do throws all ethical, moral and intellectual standards to the wind.”

The University of Sydney has previously given honorary doctorates to Robert Menzies, Gough Whitlam, Stanley Bruce and William Hughes, and plans to confer one on Bob Hawke later this year.

“It is a free country – they are entitled to their view,” Mr Howard responded.