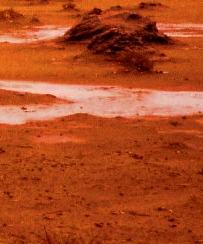 Australia is often wracked by both flood and drought at the same time, leading many to wonder; just how much water is there?

For the first time, Australian researchers have used satellite data to investigate the consequences that a decade-long drought followed by a dramatic increase in rainfall has had on Australia’s water storage dynamics.

Using a unique pair of twin satellites, researchers measured the extent and magnitude of groundwater resources and detect “hidden droughts” that can deplete groundwater.

Until now, measuring underground water supplies from high above the Earth has been as difficult as it sounds.

Knowing what happens to environmental water supplies under extreme climatic events, such as droughts and floods, is vital to better managing water resources. This is particularly so for Australia, one of the driest continents on Earth.

“Previous studies have concentrated on the causes of these extreme events and the impacts on agriculture and ecosystems, treating the big dry and big wet as discrete periods over the entire continent. This isn’t very realistic given the diversity of Australia’s climate patterns,” says lead author, University of Technology Sydney PhD candidate Zunyi Xie.

The research team took a new view of data derived from the Gravity Recovery and Climate Experiments (GRACE) satellites to study Australia’s water storage dynamics from 2002 to 2014.

To better understand the timing of changes in total water storage (TWS) across the continent, the scientists had to define a per-pixel transition date between dry and wet periods based on GRACE observations.

Their advanced methods allowed them to individually derive information on the ‘big dry’ and ‘big wet’ change-over for each pixel.

“We found the timing of the transition date between the ‘big dry’ and ‘big wet’ varied considerably across the continent,” Xie says.

“Overall, there was a 12 month lag in the hydroclimatic shift from ‘big dry’ to ‘big wet’ conditions between eastern and western parts of Australia.”

Xie said the study shows the enormous range of hydrological dynamics over the continent.

“We found highly variable continental patterns in water resources, involving differences in the direction, magnitude, and duration of total water storage responses to drought and wet periods,”: he said.

“These responses clustered into three distinct geographic zones that correlated well with the influences from multiple large-scale climate modes.”