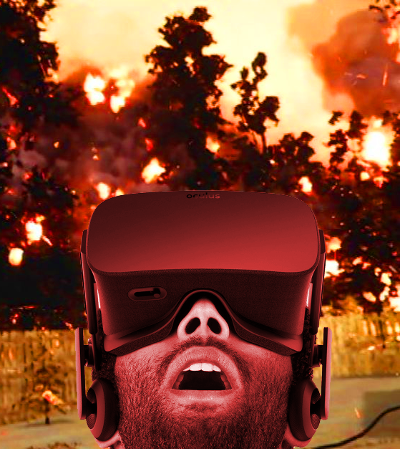 Allowing people to safely experience a raging bushfire with a 3D headset has exposed some harsh truths about Australians living in high-risk fire zones; most are woefully unprepared.

About 400 people participated in the Australian-first experiment, which came up with some interesting results.

Prior to the exercise, 55 per cent said they would ‘wait and see’ on a severe fire day rather than committing to evacuate early or ‘stay and defend’, and more than two thirds of people (68 per cent) incorrectly believed the bathroom was the safest place to shelter.

They then participated in a VR exercise which immersed respondents in every element of a fire crisis (minus the heat).

Following this, many of the non-committal group changed their minds, saying they were more likely to evacuate early after virtually experiencing the hellish conditions of a bushfire.

A total of 17 scenes of a bushfire were experienced through the 3D headset, including early warning signs, changeable weather conditions, the sights and sounds of the fire ripping through a property and threatening lives, and after the fire front had passed.

Two versions of the VR scenario were prepared: one for residents who planned to ‘stay and defend’ and a second one for residents who intended to ‘wait and see’. The latter group were virtually prevented from leaving their property by a tree blocking their access route, reinforcing the need for a contingency plan.

Prior to the exercise, 25 per cent of the ‘wait and see’ group had a written survival plan, compared to 52 per cent of the ‘stay and defend’ – still alarmingly low, considering many were CFS members.

In the VR scenario, receiving the CFS ‘watch and act’ message acted as a first trigger for 37 per cent of the ‘wait and see’ cohort to leave and another 20 per cent in that group elected to leave once their neighbours evacuated.

Just 14 per cent of that group decided they would stay and fight the fire after experiencing it virtually.

When followed up three months later, 75 per cent of participants remembered a salient lesson: shelter in a room with multiple exits as far away as possible from the fire front. The same percentage said the exercise had ‘greatly informed’ their understanding of a bushfire and the need for a survival plan.

“Many respondents realised they were not ready to deal with a fire, both practically and emotionally,” says UniSA Professor of Environmental Science, Dr Delene Weber.

“What was clear from this virtual reality scenario is that we need fundamentally different approaches to educate people about bushfire plans, and VR is a very effective one.

“The beauty of VR is that we can adapt and customise scenarios to target different groups of people, including women and those who are more vulnerable.”

The findings are accessible here.