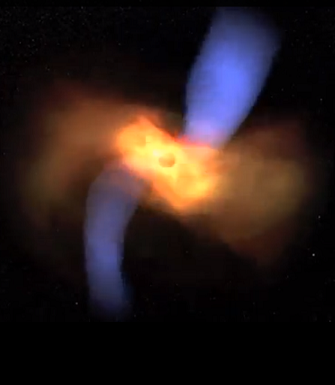 A team at the University of Sydney have reconstructed a particularly violent event in our galaxy’s history, rendering a nearby black hole which briefly leapt into life, consumed a star and spewed energy across space.

The finding has suggested for the first time that supermassive black holes can spark into life and then calm down again in short cycles. Short cycles by galactic standards that is, where a million years is just a moment. The beast was possibly awoken by having an entire burning star drop into its belly.

Researchers say about two million years ago the supermassive black hole that resides in the middle of our galaxy erupted and illuminated a cloud 200,000 light years across. The findings were based on investigations of the Magellanic Stream; a trail of hydrogen gas that is dragged by our galaxy's two companions - the Large and Small Magellanic Clouds.

“Since 1996, we've been aware of an odd glow from the Magellanic Stream, but didn't understand the cause. Then this year, it finally dawned on me that it must be the mark, the fossil record, of a huge outburst of energy from the supermassive black hole at the centre of our galaxy,” said Professor Joss Bland-Hawthorn, lead author of an article on the research to be published in The Astrophysical Journal, from the University's School of Physics.

Martin Rees, Astronomer Royal, and one of the first scientists to suggest that massive black holes power quasars, says: “It's been long suspected that our Galactic Centre might have sporadically flared up in the past. These observations are a highly suggestive 'smoking gun'.”

The team have calculated the sleeping giant - four million times the mass of the sun - awoke and flew into a rage 100 million times more violent than it is today.

When asked if it could happen again, Professor Bland-Hawthorn said: “Yes, absolutely! There are lots of stars and gas clouds that could fall onto the hot disk around the black hole... There's a gas cloud called G2 that astronomers around the world are anticipating will fall onto the black hole early next year. It's small, but we're looking forward to the fireworks!”

The University of Sydney have rendered their measurements and findings into a YouTube video available here.