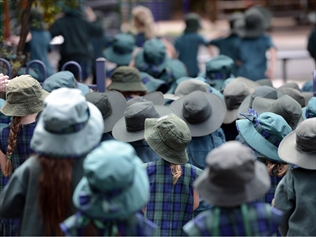 The Victorian State Government has unveiled a shake-up of its education system, which will see the educational achievements of parents used to determine how much funding schools get.

The Government has been working out how to distribute $747 million in funding allocated under the Gonski agreement, which represents a boost in needs-based funding for Victorian schools of over 70 per cent.

Currently, funding for disadvantaged schools is based on the occupations of students' parents, but now their level of education will be a factor as well.

“For the first time, parents' education attainment, their job, what they do for a living, is being taken into account. No other Australian state does this,” Premier Daniel Andrews said.

“We know that often these factors are linked to the disadvantage that students and school communities face.”

Education Minister James Merlino said it would target funding at the most needy schools.

“We're adding in the education attainments of the parents, so it's a much tighter way to target disadvantage funding... This is world-leading stuff and it goes beyond Gonski, really targeting the needs of every single student in every government school in Victoria,” he said.

Mr Andrews said the money would flow from next year.

“This is the biggest and the most profound boost to school education funding we've seen for many, many years,” he said.

Over $170 million will go to programs for disadvantaged students, as part of what the Government says will amount to a statewide average of an extra $270 per student for the 2016 school year.

The reforms will also bring in 10 new targets for schools to encourage students in subjects like reading, maths and science.

The Government says it wants 25 per cent more Year 9 students to hit the highest levels of achievement in reading and maths in the next 10 years.

It is also pushing for a 33 per cent increase in the number of 15-year-olds reaching top standards in science.

Additionally, it is aiming to halve the proportion of students dropping out of school by 2025.

New “catch-up” funding has been provided in an attempt to get more students to meet Year 5 NAPLAN benchmarks.

Secondary schools will get $2,000 for each student who were not able to meet minimum NAPLAN standards when they were in Year 5.

Australian Education Union branch president Meredith Peace told the ABC that the broad reforms would be welcomed by parents.

“I think parents understand that some kids cost more to educate and if we're going to give an opportunity to all of our children in our community to get the best quality education, we need to look at needs-based funding,” she said.

“We certainly welcome the distribution in the way it's been done, it will certainly support those disadvantaged schools, but there's obviously more work to be done.”

Ms Peace said the next step for the Andrews Government would be to commit to the final two years of the Gonski agreement.

She says failure to do so would risk denying students $1 billion in public school funding.

The State Government is still waiting on a report by former Labor premier Steve Bracks, who is looking into an $800 million “black hole” in Gonski funding over the 2016 and 2017 school years.