The Pakistani teenager who was shot in the head by the Taliban for promoting female education has made an address to the United Nations, and received a letter from her attackers. 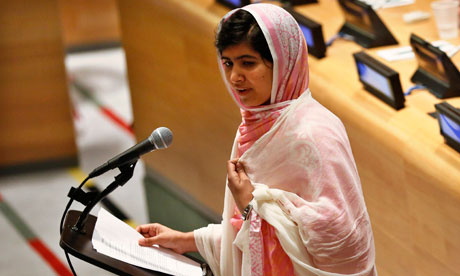 Malala Yousafzai was given a standing ovation for her speech to the United Nations Youth Assembly less than a year after the senseless attack on a school bus that left her critically wounded.

Dressed in a scarf belonging to assassinated Pakistani leader Benazir Bhutto, Ms Yousafzai spoke about the need for free access to education for all people, even those who might still seek to harm her.

“Education is the only solution,” she said, “I want education for the sons and daughters of the Taliban and all the terrorists and extremists... let us pick up our books and pens, they are our most powerful weapons.”

The sixteen-year-old is reportedly a main contender for this year's Nobel Peace Prize. Her speech showed an astounding lack of resentment for her would-be killers, promoting only peace and unity through education; “I do not even hate the talib who shot me. Even if there is a gun in my hand and he stands in front of me, I would not shoot him... the terrorists thought they would change my aims and stop my ambitions, but nothing changed in my life except this: weakness, fear and hopelessness died.”

Ms Yousafzai presented UN Secretary-General Ban Ki-moon with a petition signed by 4 million people in support of 57 million children around the world who are not able to go to school. It demanded that world leaders fund new teachers, schools and books and end child labour, marriage and trafficking.

Malala Yousafzai gained a following before the attack for her diary, published by the BBC, detailing the struggles of living and trying to attend school as a young woman in Pakistan.

Since her speech earlier this week Ms Yousafzai has reportedly received a letter from the commander of the Taliban gunman who shot her in the head last year. The vitriolic rant ran the gamut of anti-Semitic and anti-United States rhetoric, accusing the young rights campaigner of: “intentionally writing against [the Taliban] and running a smearing campaign to malign their efforts to establish Islamic system in Swat and your writings were provocative... what you are doing now, you are using your tongue on the behest of the others... use your pen for Islam.”

The letter also encouraged the teenager to join a madrassa, the Islamic equivalent of a Christian convent or seminary.

Malala Yousafzai has signed a book deal with a US publisher, and will continue her path to bring education to the poor and disadvantaged.