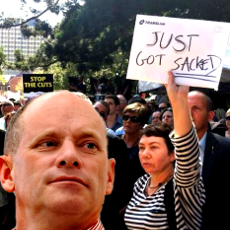 Queensland public servants are feeling the sting of a thousand cuts, with a recent survey finding more than a third believe their workplace is less efficient following a year of downsizing.

The government-commissioned Queensland Employee Opinion Survey conducted by ORC International has found 34.8 per cent of staff in the Education Department feel the cuts have hindered productivity.

About 38 per cent of the 210,000 Queensland public servants responded to the survey, with 80,000 government workers from 52 departments taking part. Education staff made up the highest proportion of respondents.

For those still in their jobs, satisfaction is high. The survey found 73.6 per cent of education staff say they are pleased with their current job.

Most departments registered job satisfaction ratings over 50 per cent, the happiest employees were found to work in the Anti Discrimination Commission.

One in three members from the police force, transport department and Department of Community Safety said they were “burned out” from their jobs. One in four from the education department said the same thing.

Together Union secretary Alex Scott said there can be a lot of influences on the responses to this kind of survey.

“We believe there’s likely an under-reporting of overwork due to fear of being identified,” Mr Scott said.

Figures from recent weeks showed there are now 12,282 fewer Queensland public servants than when the Newman Government came to power.

“I've had many more people say to me that they are intending to retire earlier than they otherwise would have because of government policy, or changes to education system they find distasteful or professionally challenging,” he said.

Acting Premier Jeff Seeney said the results would be used for departments to improve themselves.

“The Queensland public service is undergoing the most significant change in a generation, with agencies reviewing the way they work and how they provide services to Queenslanders,” he said.

“Renewal and change is hard and takes time for the benefits to kick in. That's why the government will be surveying our people regularly to continue to gather opinions and act on these important results.”