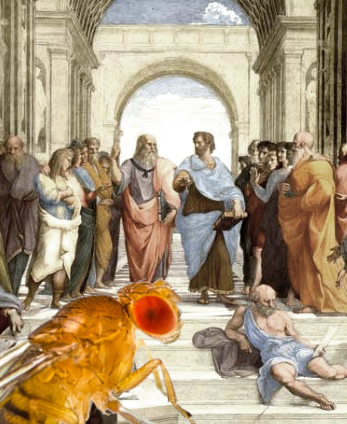 Neuroscientists now can read the mind of a fly – or at least, watch it think.

A team of engineers have developed an exciting new tool that lights up active communications between neurons.

It can be used to observe entire behaviours or sensory experiences, giving a view of what smelling a banana (for example) looks like within the brain.

If the technology was moved up to a human scale, it could be possible to map the pattern of neural connections to see the computational processes that underlie the workings of the brain.

The study focused on three of the fruit fly’s sensory systems, with fluorescent molecules of different colours injected into their brains to tag specific neurons.

They let the team see which connections were active during a sensory experience.

The fluorescent labelling technique is the first to allow scientists to identify individual synapses that are active during a complex behaviour, such as avoiding heat.

Better yet, the fluorescent signal persists for hours after the communication event, allowing researchers to study the brain's activity after the fact, under a microscope.

“Much of the brain's computation happens at the level of synapses, where neurons are talking to each other,” said study leader Marco Gallio, assistant professor of neurobiology at Northwestern University.

“Our technique gives us a window of opportunity to see which synapses were engaged in communication during a particular behaviour or sensory experience. It is a unique retrospective label.”

Gallio and his team wanted to study the brain activity of a fruit fly while it performed a complex behaviour, but this is not easily achieved under a microscope, so they developed three different coloured markers that light up at the point of contact between neurons that are active and talking to each other (the synapse).

The researchers applied their newly-engineered fluorescent molecules to the neural connections of the most prominent sensory systems in the fly: its sense of smell, sophisticated visual system and highly-tuned thermosensory system.

They exposed the animals to different sensory experiences, such as heat or light exposure and smelling bananas or jasmine, to see what was happening in the brain during the experience.

If those neurons talked to each other when a fly was exposed to the banana smell or heat, the two halves came together and lit up. This only happened at the site of active synaptic transmission.

“Our results show we can detect a specific pattern of activity between neurons in the brain, recording instantaneous exchanges between them as persistent signals that can later be visualized under a microscope,” Gallio said.

More details are available in the full report – here.