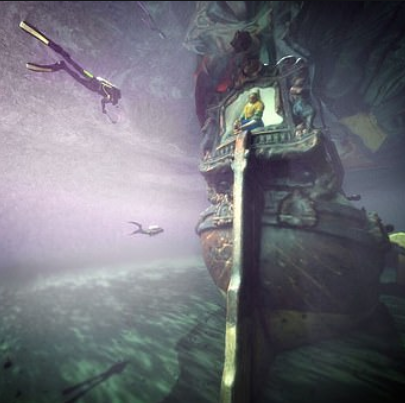 October 16th marks 360 years since the Dutch merchant ship Melckmeyt (Milkmaid) was wrecked off a remote Icelandic island during a clandestine trading mission.

Since its discovery in 1992 it has remained the oldest identified shipwreck in Iceland, and its lower hull has remained unusually well-preserved in Iceland’s icy waters.

To mark this anniversary, digital archaeology specialists at Flinders University have collaborated with maritime archaeologists at the University of Iceland to release a 360-degree virtual dive on the wreck.

The realistic virtual experience of the wreck includes a digital reconstruction of how the ship might have appeared on the seabed moments after it sank.

The three-minute virtual dive was created for an exhibition at the Reykjavik Maritime Museum, but has now been published on YouTube and is available to anyone with a VR headset, smart phone or tablet.

Melckmeyt (Milkmaid), is thought to be a type of Dutch ship known as a flute. Flutes were one of the most widely used ship types in the 17th century, a period when the Dutch ruled the seas and piracy and sea battles were a frequent occurrence.

Sensing an opportunity, enterprising merchants in the Netherlands sent a small fleet of unlicenced ships flying under a false Danish flag to trade illegally with the Icelandic population for fish and other goods.

On October 16th, the ship Melckmeyt paid the ultimate price, wrecking in a remote harbour during a sudden storm, with the death of one crew member. The survivors took shelter above water in the highest point of wreck for the next two days.

In 2016, PHD candidate Kevin Martin from the University of Iceland visited to the wreck site to carry out a detailed high-resolution 3D survey with his team, including archaeologists from the Cultural Heritage Agency of the Netherlands

“Funding from the Embassy of the Kingdom of the Netherlands in Canberra allowed me to travel from Australia to the Netherlands to make a 3D scan of a rare ship model from the 17th century, supporting the most authentic reconstruction of the ship possible,” he said.

“We have even based the stern painting on a real contemporary Dutch painting, Vermeer’s’ famous ‘Milkmaid’, painted just one year before the ship was wrecked.”

The researchers also published a paper describing the creation of the virtual dive experience.