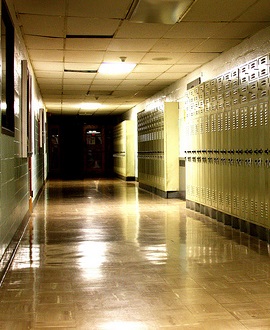 Improved health, a more active mind and free energy – it is hard to imagine a better combination of benefits from a single device.

Students in the UK can have all of these things and the thrill of breaking the “don’t run, walk” rule at school. The corridors of a school in Kent have been lined with a new device that turns kinetic energy from footsteps into electrical energy for power.

Students are encouraged to jog around for the most effective energy-harvesting.

“The students really enjoyed trying to give them a right bashing –running around and jumping up and down on them,” said Matthew Baxter - headmaster of the 1,200-pupil Simon Langton Boys’ Grammar School in Canterbury.

Stats say that the energy expected to be generated from the 12 metre strip of tiles is enough to fully charge 853 mobile phones – or one phone for two and half years. A year’s worth of students footfall could keep a light bulb illuminated for more than two months or power an electric car to drive eleven kilometres.

“Imagine if children running, playing and walking in all schools in the UK could help power the lights in their school corridors or the applications in their classrooms,” inventor Laurence Kemball-Cook, a former pupil at the school and now chair of the manufacturer Pavegen Systems.

“What we’re doing here is something quite different and quite creative and innovative,” said the headmaster.

“Our students spend about a third of their time going outside and beyond the curriculum, looking at the kind of research they might be able to do in universities and beyond,”

“We want to create the mathematicians, scientists and engineers of the future – not just teach the national curriculum and exam syllabuses. That’s not the kind of approach we want.”

Other inventions from the same mind include a dancefloor for music festivals with handily-integrated phone-charging points.