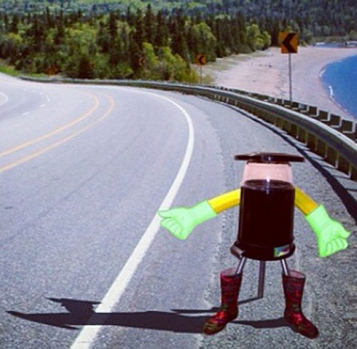 A friendly pile of junk will be making its way across Canada in an experiment to see if robots can trust humans.

Hitchbot is collaborative art/engineering project which will try to charm its way into cars and across the country.

It hopes to bum its first lift from the Nova Scotia College of Art and Design in late July.

“A lot of the discourse around robots has been, you know, will they take over, can we trust robots?” said David Smith, an assistant professor at McMaster University.

Hitchbot will have a number of technological capabilities – it maintains a Twitter feed, talks to those around it, can search Google for conversation content and even plot its journey via GPS.

But its casing is decidedly low-tech, with an esky for a body and a cake cover as a head, its only moving part will be an arm with the customary hitchhiker’s thumb. Hitchbot will feature an LED face for displaying emotions and text messages as well as a car booster seat for buttocks.

It will be covered in solar panels, but can also be recharged from car cigarette lighters or a wall outlet.

If Hitchbot's power runs out while waiting for a ride, written instructions on its body will tell people how to strap it into the car and plug it in.

“It'll be sort of like having an out-of-control teenager in your car, taking pictures of you and posting them to Facebook,” Smith said, adding that anyone who did not wish to have their entire journey documented online should not pick up a robotic hitchhiker.

There is of course a high likelihood that Hitchbot will be abducted by someone with more nefarious intentions than the average motorist, but the designers say they hope the constant online monitoring and ineffable charm of the little character will stop anyone bringing it to too much harm.