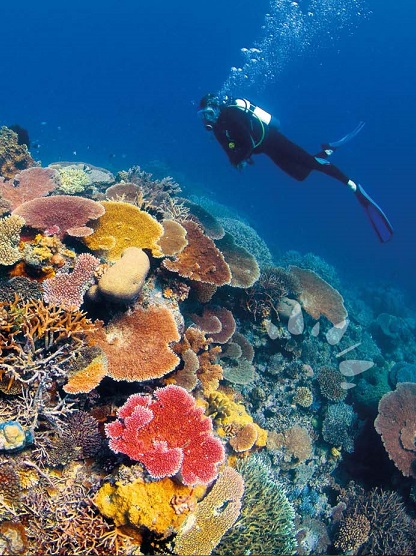 A Queensland tourism lobby leader has described a leading Great Barrier Reef researcher as “a dick”.

The Association of Marine Park Tourism Operators (AMPTO) - a group representing dozens of businesses – wants the federal government to stop funding the work of Professor Terry Hughes, whose comments it blames for a downturn in reef tourism growth.

Professor Hughes - director of the ARC Centre of Excellence for Coral Reef Studies – is one of the world’s leading experts on the reef.

He has, through research and public comments, been warning of the damage that rising water temperatures and increasing ocean acidification are inflicting on the reef.

“I think Terry Hughes is a dick,” he told Guardian Australia.

“I believe he has done tens of millions of dollars of damage to our reef in our key markets, being America and Europe. You went to those areas in 2017 and they were convinced the reef was dead. And people won’t do long-haul trips when they think the reef is dead.”

The lobby says that in 2016, reef tourism was near pre-global financial crisis levels, but “that growth died” in 2017.

“All driven off the back of the negative comments made by a researcher paid entirely by commonwealth funds,” Mr McKenzie said.

“I think it is a misuse of commonwealth funds to make false or misleading comments to the media.”

Some of those “negative comments” included research based on extensive aerial and underwater surveys published in 2016, which found only 7 per cent of 911 reef surveyed had escaped coral bleaching.

The Australian Conservation Foundation says tourism operators should not blame scientists for the state of the reef, given that the real problem is climate change.

“Blaming scientists and attempting to get their funding cut is the worst possible response to this crisis,” foundation CEO Kelly O’Shanassy told reporters.

“Scientists are not to blame. Big polluters and their political allies are to blame. We need high-quality science more than ever so we can monitor and track what’s happening to the reef.”