Redemption for dingoes from historic blame 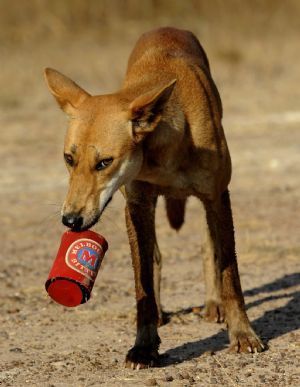 Dingoes have most certainly been given a bum rap in Australia but a new study has helped put them on the path to redemption, showing that dingoes are not responsible for the mainland extinction of the thylacine and Tasmanian devil.

A paper has been published in the journal Ecology detailing the efforts of a team from the University of Adelaide. The researchers say that popular belief suggests the Australian dingo is to blame for the demise of thylacines and devils on the mainland about 3000 years ago, but in fact human populations and a shift in climate were more likely responsible.

The team put together a complex series of computer models to recreate the dynamic interaction between the main suspects for extinction (dingoes, climate and humans), the long-term response of herbivore prey, and the viability of the thylacine and devil populations.

The models included interactions and competition between predators as well as the influence of climate on vegetation and prey populations.

The simulations showed that while dingoes had some impact, growth and development in human populations, possibly intensified by climate change, was the most likely extinction driver.

Dr Thomas Prowse, Research Associate at Adelaide’s School of Earth and Environmental Sciences and the Environment Institute, says it is time to lay off the dingo.

“However, and unfortunately for the dingo, most people have overlooked that about the same time as dingoes came along, the climate changed rather abruptly and Aboriginal populations were going through a major period of intensification in terms of population growth and technological advances,” Dr Prowse said.