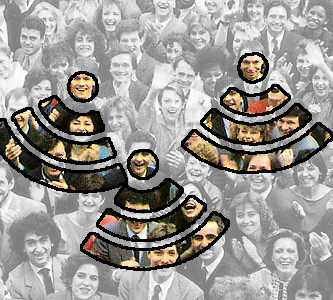 Researchers have struggled for years with what is known as the ‘cocktail party problem’; picking out one person’s speech when multiple people nearby are talking simultaneously.

It something humans do naturally, but for machines has been extraordinarily difficult.

Previous attempts to get artificial systems to pinpoint the source of a sound have involved systems that compare inputs from multiple microphones, or complex algorithms that try to separate different voices in a recording, based on their pitch and tonal characteristics.

But now, a simple 3D-printed device appears to have leapfrogged prior efforts, and is able to spot the source of a sound without any sophisticated electronics.

It looks like a thick plastic disc, about 30cm in diameter.

It has openings around its edge to channel sound through 36 tunnels and toward a microphone in the middle.

Each tunnel subtly changes the sound in as it travels towards the centre — similar to an equaliser, explains research engineer Steven Cummer.

“The way the disc works is simple,” he says.

“If you speak across the top of a bottle that is partially filled with water, the air inside will resonate with the sound of the voice and attenuate certain frequencies, depending on the amount of water in the bottle.

“In the plastic disc, the innards of each sector are patterned with a honeycomb-shaped structure in which each hexagonal cell is cut to a different height.”

This makes the disc function like an array of bottles filled with different amounts of water.

While human ears cannot even distinguish how the sound is altered by different passages, the Duke University team has written an algorithm that, using the disc, is able to tell which direction a sound came from with remarkable accuracy.

The device is a new addition to the world of 'acoustic metamaterials'; structures made with small features that can affect acoustic waves that pass through them.

Experts say the size of the device is its biggest limitation for now, and the fact that this early version can only pinpoint the source of relatively high frequencies.

But they say it is an exciting first step, with plenty of room for optimisation.