There is still strong resentment between parts of the Western Australian education sector and the State Government, with 15,000 staff taking to the streets in strike action on Thursday.

A massive crowd of teachers, support staff and even students filled the grandstands of a sports ground in Perth to voice their anger at job cuts and a hiring freeze for public schools.

The industrial action is the result of stymied negotiations and weeks of tension between workers and the government department.

The plight of the teachers has been supported by several unions; the Teachers Union, United Voice and the Public Sector Union all addressed the crowd yesterday.

There was some progress on the teachers’ movement though, with members passing five bills that will spell the way ahead.

A bill to condemn the Premier and the Education Minister for misleading the community over budget cuts, and an agreement to raise community awareness through joint-union petitions were among the plans for the next wave of action.

Aside from the main gathering in Perth there was a healthy turnout at satellite protests around Western Australia. Reports say 2000 teachers, parents and students gathered at a rally in Bunbury; over 100 rallied in Broome; 200 people expressed their discontent on a sporting oval in Karratha; hundreds marched on Hannan Street in Kalgoorlie and at least 300 protested in Geraldton.

The Government says it will not back down, but is willing to keep talking.

Education Minister Peter Collier said the strike action ultimately harmed students: “As a former teacher I don't think it serves any valuable purpose for the education of the students in our schools...suffice to say our schools are very, very well resourced, we have highly professional, very efficient principals and administrators and passionate and committed teachers,” he said.

“The Premier and I will be meeting with the State School teachers union on Monday to continue that dialogue... we are moving to a much more effective, better targeted system of funding throughout Western Australia.”

WA Treasurer Troy Buswell says tough decisions have to be made, and workers in any industry are annoyed with budget cuts hit them.

“It is a bitter pill to swallow from a community point of view when governments have to alter their spending habits, every single time we reduce spending in an area, we get criticised,” he said.

"We're going to have to harden our resolve to deal with these issues.”

One issue is likely the state’s loss of its AAA credit rating yesterday after the government failed to make appropriate cuts in the eyes of assessors. 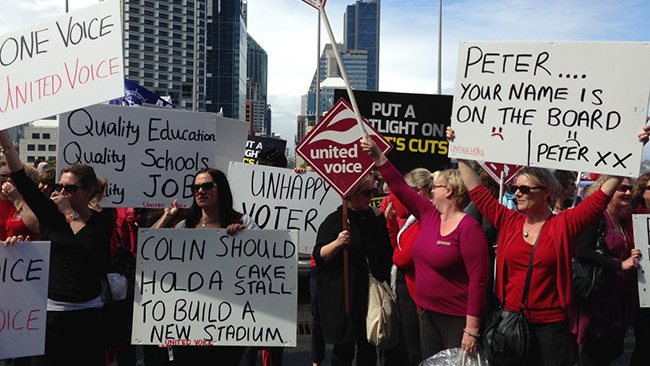