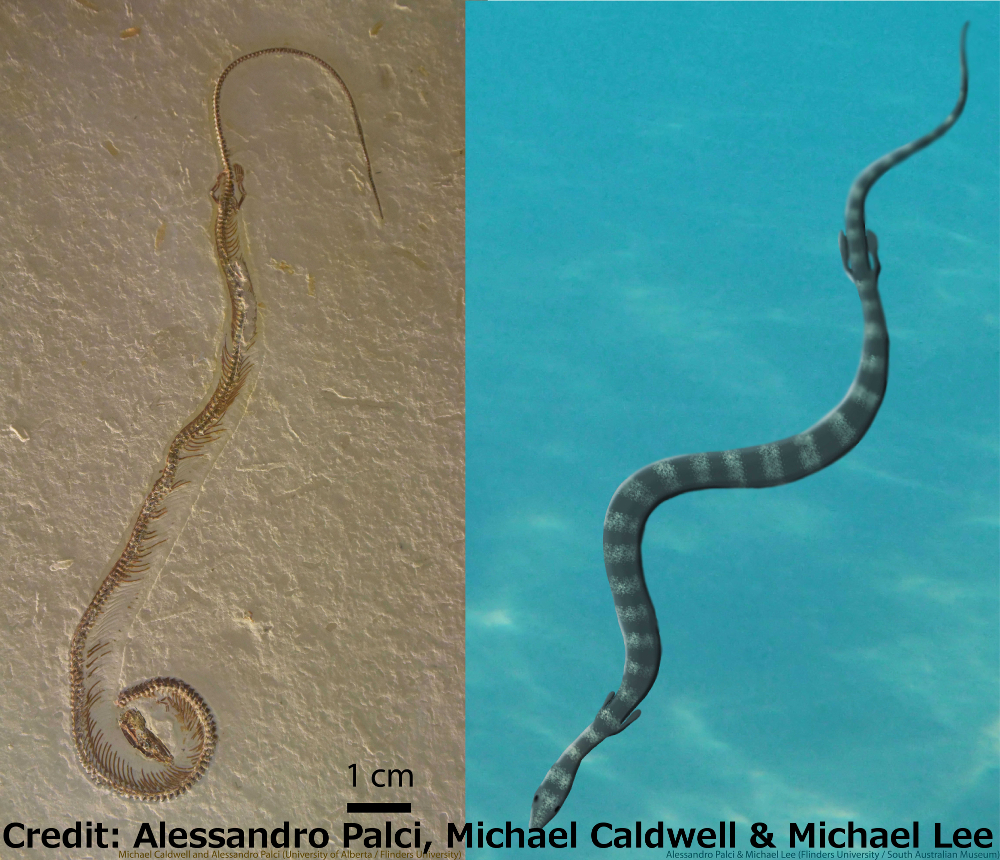 Biologists have wrestled for years with the question of when snakes lost their legs.

But a new study takes the slippery origin of the snake in a somewhat unexpected direction.

Australian research says snakes may have evolved their long, limbless bodies in an aquatic environment.

It has long been believed that snakes evolved their serpentine form for burrowing.

However, a new study of a primordial fossil snake reveals that it was probably aquatic – meaning snakes evolved their long bodies for swimming at some point in their transition from the dinosaur age.

A team led by Professor Michael Lee and Dr Alessandro Palci (from Flinders University and the South Australian Museum respectively) re-studied one of the most important and controversial fossils of modern times, Tetrapodophis.

The 120 million-year-old creature lived during the age of dinosaurs in what is now Brazil, and was a tiny snake-like creature that retained four short legs.

It has been described as the ‘missing link’ of snake evolution.

Tetrapodophis was described by fossil experts last year as a primitive snake and widely interpreted as a worm-like burrower, thus supporting the idea that snakes evolved underground.

However, the new study reveals that Tetrapodophis had the wrong body shape for burrowing, and instead possessed a suite of adaptations that are typical of aquatic animals.

“The shape of the animal also doesn't quite fit with a burrower,” says SA Museum Earth Sciences researcher Professor Lee.

“For instance, it has a long slender tail and four slender legs, something you don't see very often in burrowing snakes and lizards today,” he said.

New evolutionary trees place the marine mosasaurs as the nearest relatives to snakes, and other primitive snakes.

“Furthermore other primitive snakes, such as the two-legged Pachyrhachis from the Middle East, are definitely aquatic,” Dr Palci says.

“We need to seriously contemplate the idea that snakes had aquatic origins,” says Professor Lee.

The radical new ideas about the aquatic habits of Tetrapodophis add to the debate surrounding this exquisite fossil, he says.

“When it was first described, there were questions about the legality of its provenance, whether this privately-owned fossil might be perpetually available for study, and even its identity as a primitive snake.

“These issues are still brewing, and the latest study helps cement this tiny reptile as one of the most important and controversial fossils of our times.”