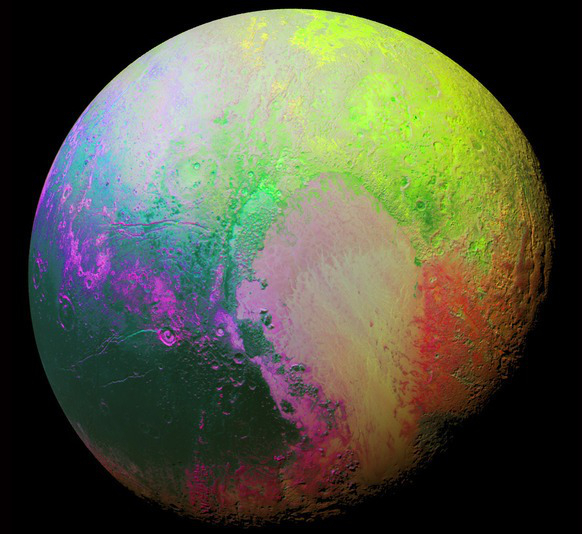 NASA scientists have discovered that Pluto is still geologically-active – a finding that has shocked many of those involved in the New Horizons mission.

New Horizons recently sent back a stunning “psychedelic” image of the dwarf planet Pluto, the latest shot from the space probe blasting past the outer limits of the solar system.

One of the features to be observed in greater details was the large heart-shaped lobe on the western side of the planet, ‘Sputnik Planum’.

Scientists have been baffled since the first photos came back, because there is a distinct lack of craters on the plain.

This suggests that the surface is relatively new.

Their latest analysis suggests that Sputnick Planum is only about 10 million years old, which would infer that Pluto has the capability to produce the immense heat or pressure that can reshape rocks and create new geologic features.

New Horizons lead investigator Alan Stern says; “It’s a huge finding that small planets can be active on a massive scale, billions of years after their creation.”

The lack of craters on Sputnik Planum suggests that the new surface was added quite recently, but there are some regions on Pluto that are much older, approaching ages up to 4 billion years.

Stern says he believes Pluto has been geologically-active for much of its life, but since it is so small, that heat that remained after the planet’s formation would have dissipated into space long ago.

It means that researchers are still unsure just what is driving the geological processes on Pluto, but they hope new data streaming back from New Horizons will keep helping them to figure it out.