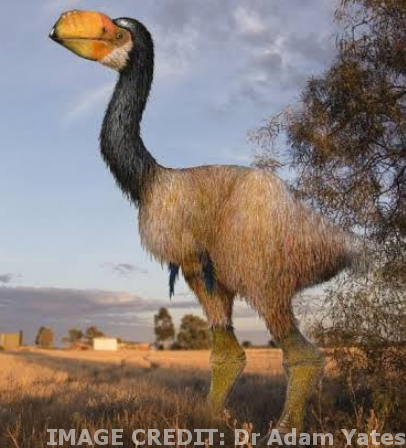 Scientists have completed a new study on the extinction of Australia’s megafauna, and say their demise was not only because of people.

‘Megafauna’, giant beasts that once roamed the continent — including wombat-like creatures as big as cars, birds more than two metres tall, and lizards more than seven metres long — became extinct about 42,000 years ago. But the role of people in their demise has been hotly debated for decades.

In a new study, researchers from the ARC Centre of Excellence for Australian Biodiversity and Heritage (CABAH), analysed fossil data, climate reconstructions, and archaeological information describing patterns in human migration across south-eastern Australia.

The team used sophisticated mathematical models to test scenarios to explain regional variation in the periods during which people and megafauna coexisted.

For the first time, the research suggests a combination of climate change and the impact of people sealed the fate of megafauna, at least in south-eastern Australia, and that distribution of freshwater — a precious commodity for animals and people alike as the climate warmed — can explain regional differences in the timing at which megafauna died out.

“There has been much debate among scientists about what conditions led to this extinction event,” said lead author Dr Frédérik Saltré, Research Fellow and Coordinator of the Global Ecology Lab at Flinders University.

“Resolving this question is important because it is one of the oldest such extinction events anywhere after modern human beings evolved and left Africa,” he added.

The findings, published in Nature Communications, are the result of analysis and complex modelling based on data including more than 10,000 fossils and archaeological records.

They developed sophisticated models to test the impact of factors including climate, water availability, and human activity on localised patterns of megafauna extinction.

The extinction pattern could only be explained by the combination of people sharing the environment and the reduced of availability of freshwater due to climate change.

“The regional patterns in extinction are best explained by the hypothesis that people migrated across Australia, exploiting lakes and other sources of drinking water connecting the drier regions in between,” said co-investigator Professor Corey Bradshaw of the Global Ecology Lab at Flinders University.

“It is plausible that megafauna species were attracted to the same freshwater sources as humans, thus increasing the chance of interactions.”

The new insight that human pressure and climate change work together to trigger species extinction is a “stark warning” for the immediate future of the planet’s biodiversity facing even stronger climate and habitat disruption, Dr Saltré concluded.