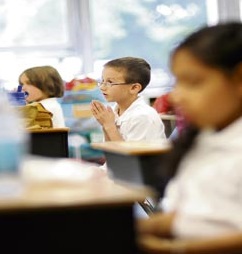 Legislation which allows faith-based schools in Tasmania to refuse enrolment for students of opposing faiths has been tightened.

The laws have been adjusted to stipulate that a student can only be rejected at the time of their enrolment and only if the school is at capacity.

Schools will be allowed to apply for an exemption from normal discrimination laws in order to impose their selective criteria.

“There is a chance that schools of faith were contravening the [Anti-Discrimination] Act ... if they made decisions based on a person's religion unless they sought an exemption,” Tasmanian Attorney-General Brian Wightman said.

“So we have provided a narrow exemption that means that, at the point of enrolment, if a particular grade is oversubscribed in a particular year, they can seek to have an exception from the Act based on a person's religion.”

The new amendments to the state’s Anti-Discrimination Act importantly give Tasmanians the strongest protection against abusive or bullying conduct on the basis of sexual orientation in Australia.

The passing of the amendments extends protection from offensive conduct which prohibits a person from offending, humiliating, intimidating, insulting or ridiculing another person on the basis of their sexual orientation, gender or sexual identity.

Tasmania's anti-discrimination laws have been extended to provide protection to transgender and intersex residents.