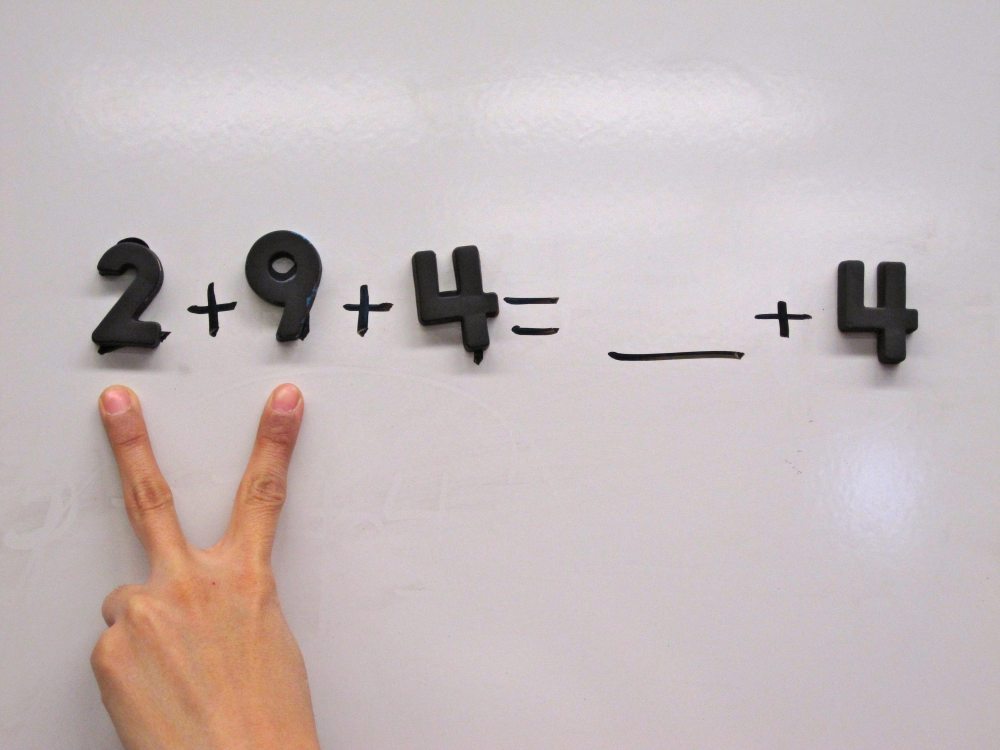 Research has shown the power of teaching and learning maths with hand gestures.

Once the students picked up their strategy for solving the equivalence problems, researchers tested them on similar problems to see which strategy brought the highest ongoing success rate.

All three of the strategies tested involved some kind of physical interaction with the problem.

In one group students used magnetic numbers, putting them in their proper place to balance the formula.

Another group mimed the action of moving the numbers without actually touching the tiles, and a third group was taught to use abstract gestures with their hands to solve the equations.

In the abstract gesture group, children were taught to produce a V-shaped gesture with their fingers under two of the numbers, metaphorically grouping them, followed by pointing a finger at the blank in the equation to show where the equivalent numbers should be.

The students were tested before and after solving each problem in the lesson, including problems that required them to generalise beyond what they had learned in grouping the numbers. For example, they were given problems that were similar to the original one, but had different numbers on both sides.

“We found that acting gave children a relatively shallow understanding of a novel math concept, whereas gesturing led to deeper and more flexible learning,” explained the study’s lead author, Miriam A. Novack, a PhD student in psychology.

“Abstract gesture was most effective in encouraging learners to generalise the knowledge they had gained during instruction, action least effective, and concrete gesture somewhere in between,” said senior researcher Dr Susan Goldin-Meadow, Professor in Psychology at the University of Chicago.

“Our findings provide the first evidence that gesture not only supports learning a task at hand but, more importantly, leads to generalisation beyond the task.

“Children appear to learn underlying principles from their actions only insofar as those actions can be interpreted symbolically.

The study, “From action to abstraction: Using the hands to learn math,” has been published online by Psychological Science.