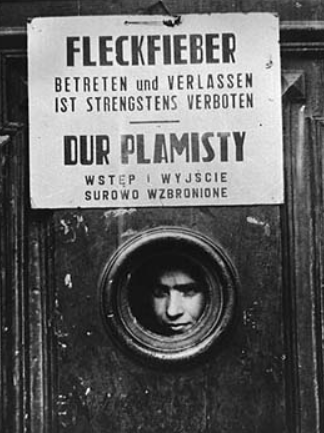 As many as 120,000 ghetto inmates were infected by Typhus, with up to 30,000 dying directly from it and many more from starvation or a combination of both.

Professor Lewi Stone from RMIT University says the disease was used as a weapon of war and as a pretext for genocide.

“Then, in October 1941, as a harsh winter was beginning and just as Typhus rates would be expected to skyrocket, the epidemic curve suddenly and unexpectedly nose-dived to extinction,” he said.

“It was inexplicable at the time and many thought it was a miracle or irrational.”

Through state-of-the-art mathematical modelling and historical documents, new research points to community health programs and social distancing practices as the most likely explanations for the epidemic’s sudden and ‘miraculous’ collapse.

The study found that the epidemic was on track to become 2 to 3 times larger and peak in the middle of winter, just before it disappeared.

“Fortunately, many of the anti-epidemic activities and interventions are documented and it turns out that Warsaw Ghetto had many experienced doctors and specialists,” he said.

“To learn more, I spent many, many hours in libraries around the world seeking rare documents or publications to find details about the interventions employed and the actual size of the epidemic itself, which was also poorly recorded.”

General hygiene and apartment cleanliness were encouraged and sometimes enforced. Social distancing was considered basic common sense, and home quarantining was not uncommon. Many volunteer soup kitchens were opened up in the period before the epidemic’s decline.

“In the end, it appears that the prolonged determined efforts of the ghetto doctors and anti-epidemic efforts of community workers paid off,” Dr Stone says.

“There is no other way we can find to explain the data.”

One of the study’s primary sources was respected historian, Israel Gutman, who wrote “while almost 100,000 ghetto residents died mostly from starvation and disease in the period up until July 1942, a similar or greater number were saved thanks to the dedicated relief workers and self-help relief agencies operating”.

“The tragedy, of course,” says Dr Stone, “is that almost all of those lives saved through these sacrifices, discipline and community programs would soon end in extermination at the Nazi death camps.”

Typhus – a bacterial disease spread by lice – had pandemic status in Europe. It is less contagious but deadlier than COVID-19. While the two diseases spread and behave differently, the team says there are still parallels and lessons to be learnt.

“Today, more than ever, society needs to grasp how the damage caused by a tiny virus or bacteria can create utter havoc, dragging humankind to the terminal point of evil as witnessed over the Holocaust,” Dr Stone says.

As those in the Warsaw Ghetto demonstrated, the actions of individuals in practicing hygiene, social distancing and self-isolating when sick, can make a huge difference within the community to reduce the spread.