Genetic journey shows we may be extra-terrestrial 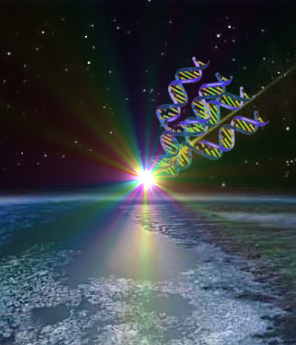 Research has shown that DNA can survive a flight through space and back into Earth's atmosphere, while keeping its genetic information intact.

A team from the University of Zurich obtained the astonishing results during an experiment on the recent TEXUS-49 research rocket mission.

A part of the space-based science project, a team attached a payload of pipettes filled with double-stranded DNA molecules to the outer shell of the rocket.

The keys to life on Earth then flew into space and back again.

After the launch, space flight, re-entry into Earth's atmosphere and landing, the DNA molecules were still attached to all the application points, and even more incredibly, most of the DNA still worked.

The salvaged genes were still able to transfer genetic information to bacterial and connective tissue cells.

“This study provides experimental evidence that the DNA's genetic information is essentially capable of surviving the extreme conditions of space and the re-entry into Earth's dense atmosphere,” says study head Professor Oliver Ullrich from the University of Zurich's Institute of Anatomy.

For many, the find adds weight to the theory that life on Earth was deposited here from somewhere deep in space.

The experiment dubbed DARE (DNA atmospheric re-entry experiment) resulted from a spontaneous idea when UZH scientists were conducting experiments ahead of the TEXUS-49 mission.

The rocket’s original intention was to study the role of gravity in the regulation of gene expression in human cells, using remote-controlled testing equipment inside the rocket.

But during the mission preparations, they began to wonder whether the outer structure of the rocket might also be suitable for stability tests on so-called ‘biosignatures’.

“Biosignatures are molecules that can prove the existence of past or present extraterrestrial life,” said Dr Thiel.

So the researchers launched a side mission at the European rocket station Esrange in Kiruna, north of the Arctic Circle.

Dr Thiel did not expect the exciting results it produced.

“We were completely surprised to find so much intact and functionally active DNA,” he said.

The study shows that genetic information in DNA can withstand some of the most extreme conditions imaginable.

It also has implications for future space travel, showing that it is very likely space ships could carry Earth DNA to their landing site on other planets, and this must be factored into the search for new life-forms.

The paper, ‘Functional Activity of Plasmid DNA after Entry into the Atmosphere of Earth Investigated by a New Biomarker Stability Assay for Ballistic Spaceflight Experiments’, has been published in the journal PLoS ONE.