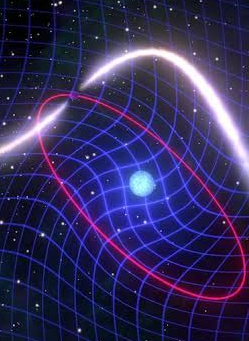 Australian researchers have observed a star as it bends space and time.

Local astrophysicists have found exciting new evidence for ‘frame-dragging’ – wherein the spinning of a celestial body twists the space-time continuum.

Einstein’s iconic theory of General Relativity, describing how the force of gravity arises from the curvature of space and time, postulated that objects such as the Sun and the Earth can change this geometry.

Einstein’s theory has been proven accurate over and over, more recently with the discovery of gravitational waves in 2016, and the first image of a black hole shadow and stars orbiting the supermassive black hole at the centre of our own galaxy just last year.

One is a white dwarf, around the size of the Earth but 300,000 times its density. The other is a neutron star which, while only 20 kilometres in diameter, is about 100 billion times the density of the Earth.

The system was discovered at Parkes, and has been known as a wonder of relativistic physics that goes by the name ‘PSR J1141-6545’.

Before the star blew up (becoming a neutron star), a million or so years ago, it began to swell up discarding its outer core which fell onto the white dwarf nearby. This falling debris made the white dwarf spin faster and faster, until its day was only measured in terms of minutes.

A pulsar in orbit around such a white dwarf presents a unique opportunity to explore Einstein’s theory in a new ultra-relativistic regime.

Ahead of the latest discovery, Dr Vivek Venkatraman Krishnan (from Max Planck Institute for Radio Astronomy) had the unenviable task of untangling all of the competing relativistic effects at play in the system as part of his PhD at Swinburne University of Technology.

He noticed that unless he allowed for a gradual change in the orientation of the plane of the orbit, General Relativity made no sense.

Fellow Max Planck researcher Dr Paulo Friere realised that ‘frame-dragging’ of the entire orbit could explain their tilting orbit. He is part of a team that has now presented compelling evidence in support of this.

In a stellar pair, the first star to collapse is often rapidly rotating due to subsequent mass transfer from its companion. The new simulations help quantify the magnitude of the white dwarf’s spin.

They show that in this system, the entire orbit is being dragged around by the white dwarf’s spin, which is misaligned with the orbit.

It is especially pleasing for Swinburne’s Professor Matthew Bailes, Dr Willem van Straten from the Auckland University of Tech, and Dr Ramesh Bhat from Curtin University, who have been trekking out to the Parkes 64m telescope since the early 2000s, patiently mapping the orbit.

“At first, the stellar pair appeared to exhibit many of the classic effects that Einstein’s theory predicted. We then noticed a gradual change in the orientation of the plane of the orbit,” Dr Krishnan said.

“Pulsars are cosmic clocks. Their high rotational stability means that any deviations to the expected arrival time of its pulses is probably due to the pulsar’s motion or due to the electrons and magnetic fields that the pulses encounter.

Details are accessible in this newly-published paper, and a visual description is available below.