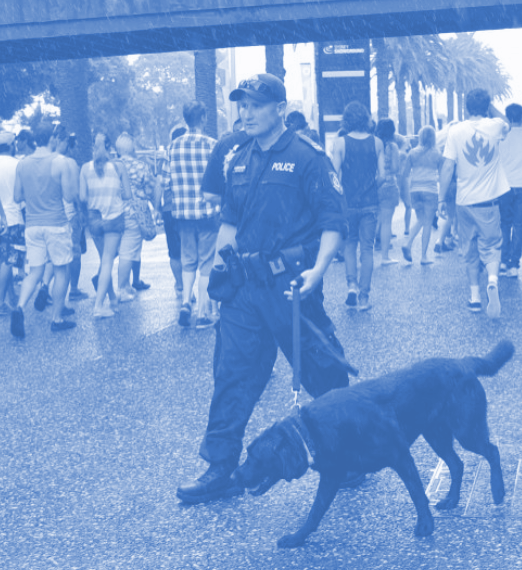 An RMIT study has found the presence of sniffer dogs and police at music festivals, train stations, and public places did not deter people from consuming drugs.

“People told us that when they realised there were dogs and police monitoring event queues they took all their drugs at once to avoid detection,” lead researcher Dr Peta Malins said.

In addition to the stigma and shame that sniffer dog searches produced, particularly for those from marginalised groups, people who had been strip searched or had a history of trauma reported significant short- and long-term mental health concerns including anxiety and distress.

“The implications of being stopped and searched by police go beyond short-term public humiliation,” Dr Malins said.

She said the findings suggest sniffer dogs are not reducing drug taking at public events and are instead increasing both trauma and the risk of overdose.

“Given that general drug detection dog operations are not working and are instead producing a range of harms including increased risks of overdose, stigma and trauma, they should be immediately discontinued,” she said.

She said police resources in festival and leisure contexts should be directed away from a focus on drug detection and deterrence, and toward enhancing or supporting patron safety.

The shift would likely not only reduce harm but also improve police- community relations which the research also showed is impaired by current practices.

“The important goal of preventing overdose fatalities in such settings would be far better served by putting resources into evidence-based, non-judgmental and non-threatening harm reduction interventions such as in-situ peer education and pill-testing,” she said.