Deceptive Australians had time to refine their tricks 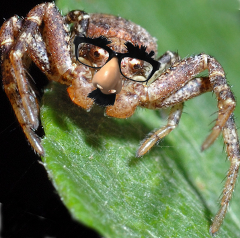 Australia’s ecology is littered with tricksters, shysters and con-artists; according to a new report.

Researchers from Macquarie University and Auckland University say deception is rampant in the local environment with characters including cuckoos, orchids and spiders all keen to pull the wool over the eyes of their prey.

Deception in a biological sense refers to the manipulation of behaviour, and is usually accomplished by mimicking the appropriate signals to trick the intended target.

Australia is known for its bizarre, unique, deadly and distinct inhabitants, but the new findings may add a sense of caution about the local wildlife.

The study into deception in Australian animals focussed on three particularly tricky figures.

Cuckoos are well known for cheating their hosts into looking after the cuckoo brood.

While they exist worldwide, Australia appears to have a high diversity of cuckoo species, and other Australian birds are less able to resist parasitism by cuckoos compared to other regions.

Sexually deceptive orchids were found to mimic female wasps and lure male wasps into ‘pseudocopulations’; during which the male inadvertently picks up the orchid’s pollen and delivers it to the next fraudulent orchid. This method of reproduction is remarkably common in Australian orchids, having evolved at least six times independently.

Even Australian crab spiders are more devious than their European or North American counterparts.

Usually, crab spiders match their body colour to the flower they sit on, ambushing insects that are unable to detect their presence. In Australia however, these crab spiders are made highly conspicuous by reflecting UV-light from their body surface. Their UV-rich colour acts as an attractive lure for pollinators who preferentially approach and even land on flowers occupied by these deceptive spiders.

Australia’s natural love of deceit could come from a number of factors, the authors of the new report say.

“The Australian dry climate and habitat fragmentation due to fire are likely to play a significant role in the evolution of deceptive strategies, especially in birds and orchids,” said Professor Marie Herberstein .

“The long evolutionary isolation of the continent, followed by more recent invasion from Asia, may have also exposed naïve natives to deceptive invaders that have subsequently radiated throughout the continent.

“Finally, the relatively young and non-conformist research culture in Australia may also encourage scientists to search out the obscure and cryptic, and certainly deception falls into that category.”

More information is available from the complete report, accessible here.