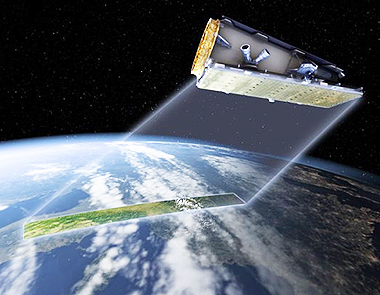 CSIRO has bought time on one of the world’s most sophisticated satellites.

The deal will give Australian scientists direct control over which data the satellite collects over our region and help place the national science agency at the forefront of Australia’s civilian space science sector.

Due for launch later this year, the NovaSAR satellite will provide CSIRO and the wider Australian research community with access to an advanced form of radar technology known as S-band Synthetic Aperture Radar, or S-band SAR, which provides high resolution images of Earth from space.

The S-band SAR technology is a significant advancement on current civilian satellite capability.

CSIRO and UK-based Surrey Satellite Technology Ltd (SSTL) have agreed to a 10 per cent share of ‘tasking and acquisition’ time on the NovaSAR satellite.

Under the terms of the agreement, worth $10.45 million over seven years, CSIRO has the right to direct the satellite’s activity over Australia, download and process data, and make these data available to the wider research community.

Some practical applications for NovaSAR satellite data and associated research projects include:

“Australia is one of the largest users of Earth Observation from Space data world-wide, with satellite data underpinning more than 100 state and federal resource mapping and environmental monitoring programs across Australia,” Minister Sinodinos said.

“This agreement will allow CSIRO, via its national facility management capability, to strengthen Australia’s delivery of excellence in science and innovation. It will help CSIRO lead our nation’s development in the technical and analytical capability of modelling, monitoring and analysing our natural resource management and approaches to infrastructure.”

“This will also lead to better and more informed support for policy and decision-making and, ultimately, our economic development as a nation.”

“The aim is to manage the NovaSAR satellite as a natural extension of the significant role CSIRO already plays in managing a range of National Facilities, on behalf of the Australian community of scientists and for the benefit of the nation,” Dr Williams said.

“Because we’ll be able to direct the satellite’s activity, it provides significant opportunities to support a wide range of existing research, further develop Australia’s earth observation data analytics expertise, and create new opportunities in the field of remote sensing.”

These new opportunities hold potential for building stronger research partnerships between the government, universities and the wider space industry in Australia.

In developing the NovaSAR-S technology, Commercial Director of Surrey Satellite Technology Ltd, Luis Gomes, said the NovaSAR-s system provided revolutionary technology to deliver imagery at any point on the globe.

“The NovaSAR-S technology enables data collection 24/7, regardless of daylight or weather conditions, which is particularly important for this continent with an area with a tropical climate and a large coastline territory.

“We look forward to working with CSIRO as one of our key partners over the next seven years to provide cutting-edge geo-spatial data for Australia’s benefit.”