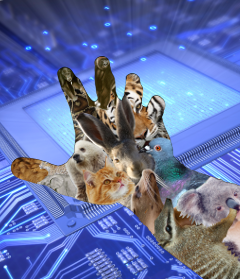 New software could add a greater depth to our understanding and ability to model evolution.

Traditional models see evolution as an essentially linear process, but in reality the interconnectedness of species has much more nuance.

The simple 'tree' has been an effective model of evolution for 150 years, but computer scientists have created a new version to better illustrate the breadth of current knowledge.

Researchers in the US have developed the “maximum likelihood” method, which can 'infer' network models that better describe the evolution of certain groups of species than can be presented in a tree model.

'Inferring' in this case means analysing genes to determine their evolutionary history with the highest probability – the maximum likelihood – of connections between species.

Rice University researcher Luay Nakhleh and his group have developed PhyloNet, an open-source software package that accounts for horizontal as well as vertical inheritance of genetic material among genomes.

To build networks that account for all of the genetic connections between species, the software infers the probability of variations that phylogenetic trees can’t illustrate, such as horizontal gene transfers. These transfers circumvent simple parent-to-offspring evolution and allow genetic variations to move from one species to another by means other than reproduction.

“When horizontal transfer occurs, as with the hybridisation of two species, the tree model becomes inadequate to describe the evolutionary history, and networks that incorporate horizontal gene transfer become the more appropriate model,” Nakhleh said.

The Java-based PhyloNet software accounts for incomplete lineage sorting, in which clues to gene evolution that don’t match the established lineage of species appear in the genetic record.

Most existing programs for phylogenetics (the study of evolutionary relationships) ignore such complexities.

“They end up overestimating the amount of hybridisation,” Nakhleh said.

“They start seeing lots of complexities in the data and say, ‘Oh, it’s complex here; it must be hybridisation,’ and end up inferring too much. Our method acknowledges that part of the complexity has nothing to do with hybridisation; it has to do with other random processes that happened during evolution.”

Nakhleh hopes evolutionary biologists will use PhyloNet to take a fresh look at the massive amount of genomic data collected over the past few decades.

“The exciting thing for me about this is that biologists can now systematically go through lots of data they have generated and check to see if there has been hybridisation.”