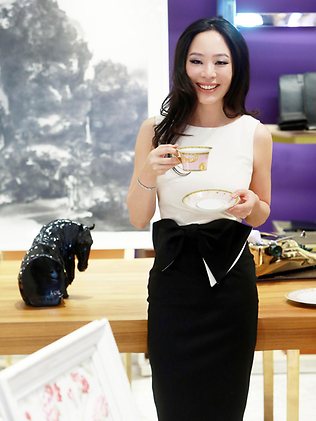 With recent reports of the rampant cheating to get ahead in the Chinese exam system, it is no surprise that the country’s rich elite are forking out for a school which deals in the finer things.

Finishing schools are popping up around China, offering classes to the wealthy in how to peel an orange, hold an oyster fork, and pronounce luxury brand names. A single two-week course at the Institute Sarita in Beijing costs 100,000 yuan ($18,000), but not even the exorbitant fee has keep dozens from signing up.

The industry is fuelled by a Chinese desire to match the traditional behaviours of the wealthy elite in other countries; they have the high-end paycheques, now they are looking for high-end lifestyles and etiquette.

Many students are women in their 40s, whose parents would have endured trauma and hardship under the rule of Mao Zedong, and whose personal wealth has grown along with the Chinese economy at break-neck speed to become one of the world’s most powerful.

Such finishing schools were once common in Western societies, but have all but disappeared. Their resurgence in China mirrors the early industrial history of the United States, where finishing schools became a popular choice for newly-rich Americans seeking European refinement.

Students at the schools in China - often hosted in luxury hotels - learn about wine, elite sports such as golf and riding, English tea service, floral art and table decorating. The high price is insignificant to many, who reportedly enjoy going on shopping sprees for the elite brands they learn about in class.

Harvard sociologist Martin Whyte said Chinese interest in etiquette was to be expected in a society enjoying newfound wealth but lacking a strong, recent “aristocratic tradition”. He says the Chinese “recognise that being viewed as 'nouveau riche' makes them vulnerable to popular criticism.”