Cat and pigeon come together to make quantum moves 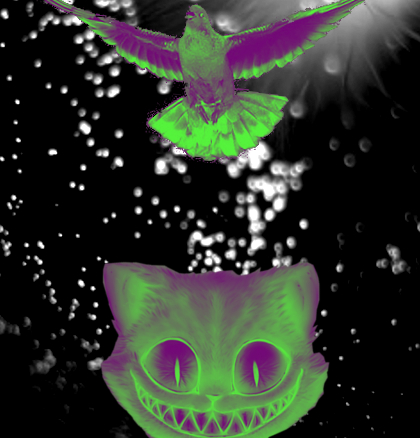 Two incredible breakthroughs have added to the dictionary of the smallest phenomena in the universe.

Both names describe bizarre aspects of nature which happen on the quantum scale.

The Quantum Cheshire Cat notion says that not only can particles be in multiple physical states at once, they can actually be separate to their own quantum ‘spin’.

Incredibly, it appears that the properties of a particle can be separated from the particle itself, just like the Cheshire Cat in Lewis Caroll’s ‘Alice in Wonderland’ disappears but leaves its iconic grin behind.

The effect was most recently observed in experiments at the Vienna University of Technology.

Soon after, at Chapman University in the US, physicists broke new quantum ground once more, describing an effect now known as the Quantum Pigeon.

They discovered that particles can experience entanglement without ever having interacted.

Previously, entanglement was thought to require particles to have “known” each other before.

“It seems to be impossible, but it is a direct consequence of quantum mechanics.”

A new paper by a team at Chapman has introduced the new kind of quantum connectivity between particles, which transcends the limitations of ‘past’ ‘present’ and ‘future.

It now appears that quantum connectivity is happening all the time on a much bigger, cosmic scale.

To describe and understand the Quantum Pigeon, physicists are working with a a series of new paradoxes and models.

They have called the first the “quantum pigeonhole paradox”.

The classical pigeonhole principle states; “If you put three pigeons in two pigeonholes at least two of the pigeons end up in the same hole.”

This is an obvious yet fundamental principle of nature, capturing the very essence of counting. But the Chapman team says it is false in quantum mechanics.

“You can put an infinite number of pigeons in two boxes, and no two pigeons will be in the same box,” says Tollaksen.

“I would guess that the new effect is a serious step in understanding quantum correlations.”

“This is a surprising breakthrough,” said physicist Paul Davies at Arizona State University in Tempe.

“It’s remarkable that it’s still possible to discover something fundamentally new about quantum mechanics, which has been around for nearly 100 years. Here we see a richer, more complex set of long-range correlations that nobody knew existed before.”