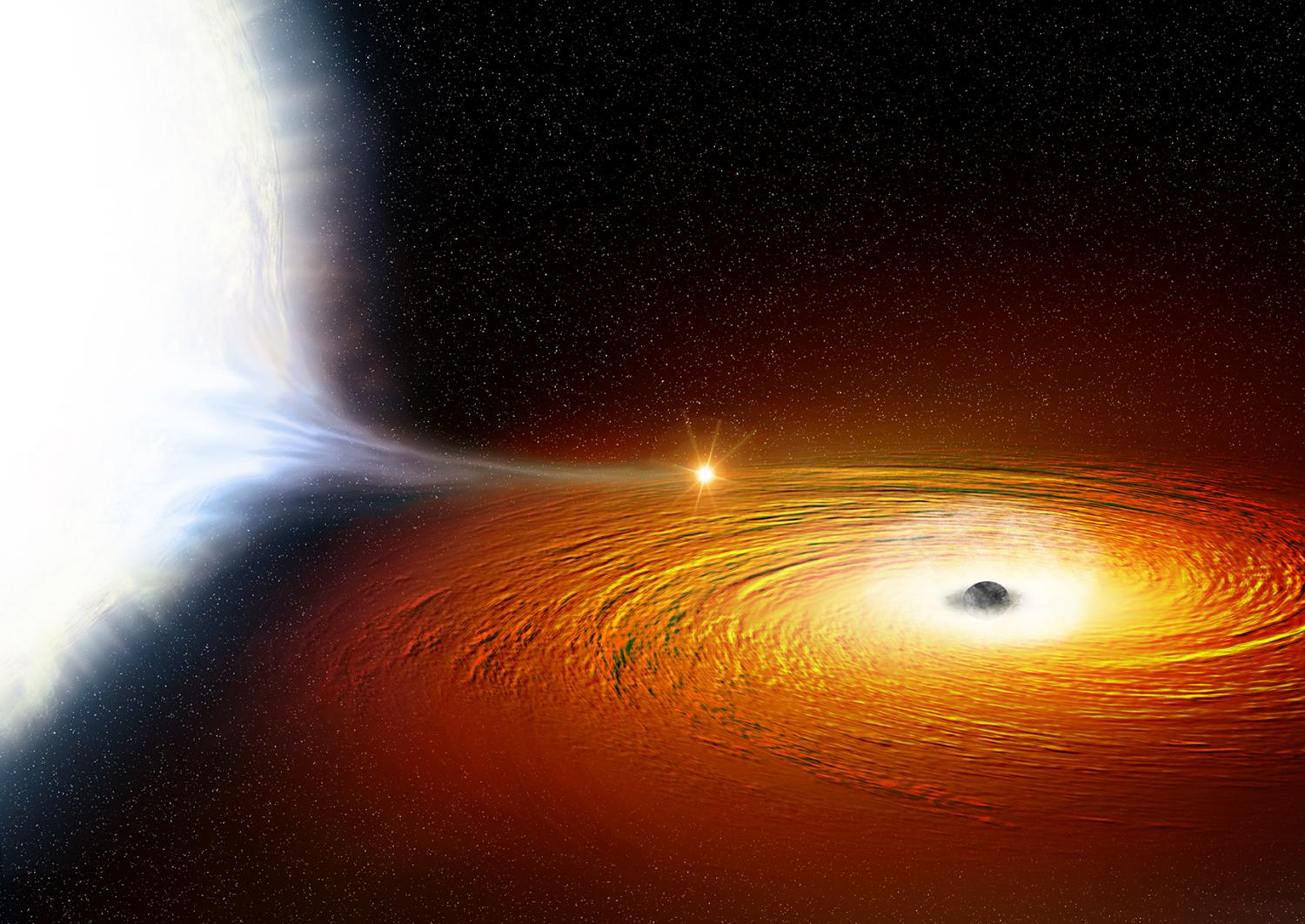 Astronomers have spotted a star whipping around a black hole a mind-bending two times an hour.

It could be the tightest orbital dance ever seen by a black hole and a companion star in our Milky Way galaxy.

The image to the right is an artist’s impression of the black hole consuming its neighbouring star.

This discovery was made using two of NASA’s space-based telescopes - the Chandra X-ray Observatory and NuSTAR - as well as CSIRO's Australia Telescope Compact Array located in New South Wales.

The stellar couple - known as a binary - is located in the globular cluster 47 Tucanae, a dense cluster of stars in our galaxy about 14,800 light years away from Earth.

While astronomers have known about the binary for many years, it took until 2015 for a team led by researchers from Curtin University and the International Centre for Radio Astronomy Research (ICRAR) to find that it was likely made up of a black hole pulling material from a companion star.

New observations from Chandra show the system - known as X9 - consistently changes in X-ray brightness every 28 minutes, which is likely the length of time it takes the companion star to make one complete orbit around the black hole.

There is also evidence of large amounts of oxygen in the system, which makes a strong case that X9 contains a white dwarf star orbiting a black hole at just 2.5 times the distance between the Earth and the Moon.

“This white dwarf is so close to the black hole that material is being pulled away from the star and dumped onto a disk of matter around the black hole before falling in,” said first author Dr Arash Bahramian.

“Luckily for this star, we don’t think it will follow this path into oblivion—it should stay in orbit.”

Although the white dwarf does not appear to be in danger of falling in or being torn apart by the black hole, its fate is uncertain.

“We think the star may have been losing gas to the black hole for tens of millions of years and by now has now lost the majority of its mass,” said Associate Professor James Miller-Jones, from Curtin University and ICRAR.

“Over time, we think that the star’s orbit will get wider and wider as even more mass is lost, eventually turning into an exotic object similar to the famous diamond planet discovered a few years ago,” he said.

One big question is how did the black hole get such a close companion?

One possibility is that the black hole smashed into a red giant star and as gas from the outer regions of the star were ejected, a binary was formed containing a black hole and a white dwarf.

The orbit of the binary would then have shrunk as gravitational waves were emitted until the black hole started pulling material from the white dwarf.

While Earth-based facilities confirmed the existence of gravity waves last year, the gravitational waves being produced by the binary system have a frequency too low to be detected by equipment on the ground.

The experts say it is possible that space-based gravity wave observatories in the future could be sensitive enough to detect them.

The latest paper is available here.