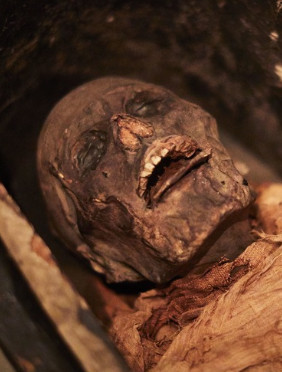 Scientists have 3D-printed the vocal cords of an ancient Egyptian priest.

The priest Nesyamun was mummified 3,000 years ago, but has been given new voice thanks to the efforts of a UK and German research team.

Researchers used non-destructive CT scans to confirm that a significant part of the structure of the larynx and throat of the 3,000 year-old body of Nesyamun remained intact as a result of the mummification process.

This allowed the authors to measure the vocal tract shape from CT images. Based on these measurements, the authors created a 3D-printed vocal tract for Nesyamun and used it with an artificial larynx commonly used in speech synthesis.

They were able to reproduce a single sound, falling between the vowels in the English words ‘bed’ and ‘bad’. It can be heard in the embedded player below.

The authors suggest that their proof-of-concept recreation of a vocal tract preserved over three millennia has implications for the way in which the past is presented to the public in the present; it may provide an opportunity to hear the vocal tract output of an individual that lived in ancient times.

A paper on the project is accessible here.