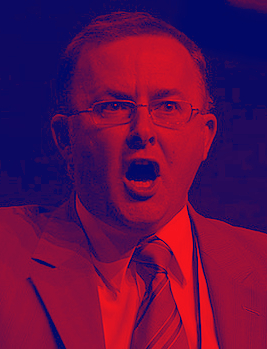 Mr Albanese addressed the Chifley Research Centre Conference in Sydney on Saturday, criticising online platforms for being unwilling to filter out content.

He referenced images circulated on Facebook that were doctored to show the opposition leader supporting men's rights activist Leith Erikson's campaign against the Family Court.

“Now, here's the rub: unless you'd seen the original, there is no way that you would know the image was a fake. My words were replaced with Mr Erikson's. The image even included my legal authorisation at the bottom — a clear breach of Australia's electoral laws,” he said.

“When we raised this with Facebook, they shrugged. They said it wasn't a breach of community guidelines.

“What then happens when platforms become so complacent with misinformation that they become unable to filter it out?”

He also called for freedom of information laws to be overhauled.

“Reform freedom of information laws so they can't be flouted by government. The current delays, obstacles, costs and exemptions make it easier for the government to hide information from the public. That's not right,” he said.

The Labor leader referenced the AFP raids on the ABC's Ultimo headquarters and the Canberra home of News Corp journalist Annika Smethurst, calling for protections for public interest journalism to be enshrined in law and for whistleblower protections to be expanded.

“Journalists raided by police, with prosecutions not fully ruled out… there's something sinister about these episodes that I know Australians will look back upon in the future with astonishment,” he said.